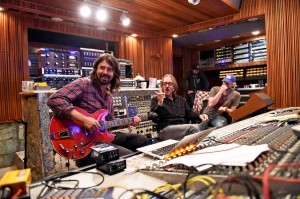 After eight weeks of religiously watching Foo Fighters’ Sonic Highways on HBO, I’m sorry to see the end of the captivating rock-docuseries. Not only did we get some impressive new songs from my favorite living rock band, we also discovered a great deal about what it takes to create an album. Although the last two songs are less than stellar, the first six are without a doubt rock and roll keepers. As a whole I give the album a B+ and the show a solid A.

Some have said that the show is better than the album and maybe they’re right – Grohl certainly knows how to put together music documentaries – but maybe we are excited about a format that provides authentic visuals and backstories for the music we love most. I meant in what other context have we been given the opportunity to watch a song, nevermind an entire album, unfold in front of our eyes.

Whether or not people are fans of the show or the album, there is no question that everyone learned something. Below is a list of things I learned from watching this epic series and reasons why Dave Grohl is arguably the best storyteller of my generation:

9) Buddy Guy created his first instruments from string and buttons.

8) Following Kurt Cobain’s death in 1994, Grohl  stayed away from playing music until he saw a kid on the side of road in a foreign country wearing a Cobain shirt. Shortly thereafter he decided it was time to get back to music and created the first Foo Fighters album all by himself.

6) Before producing Nirvana’s Nevermind and subsequent award-winning albums such as Green Day’s 21st Century Breakdown and the Foo Fighters’ Wasting Light and Sonic Highways, Butch Vig was the drummer for Garbage.

4) Prior to visiting New Orleans, Grohl knew nothing about jazz.

3) Although Sonic Highways covers a wide range of history and music styles, Grohl always goes back to his roots – punk rock.

2) Dave Grohl can get an interview from anyone. Seriously. In addition to the music legends that were part of Sonic Highways, he even sat down with the President of the United States to discuss the importance and impact of music.

1) There is nothing more exciting than watching incredible musicians create, discuss and play amazing music.