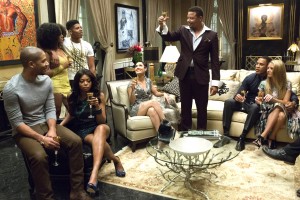 Dramatic, musical, thoughtful and funny. After wrapping up one of the most successful first seasons in television history, Empire has people all over the country talking. By week three it hit the number one spot for viewers under age 50 and reached millions of viewers spanning both genders and all ethnic groups. Additionally, following its explosive two-hour finale on March 18, the announcement was made the show about a record label family dynasty would be renewed for season two.

After writing a post on January 12 about how Empire was one of the best new shows on television so far, I’m glad that the plot continued to grab attention and the characters became richer over the 12-episode first season. Both the writing and music of this show has made it a hit, along with some extremely impressive acting and vocal talent from everyone in the ensemble cast.

Songs to download: “What Is Love,” “No Apologies” and “You’re So Beautiful.” And definitely don’t forget to give “Drip Drop” a listen – the awesome ridiculousness of Empire definitely culminates in this track.

For those of you who haven’t seen it – check On Demand and watch from the beginning. You won’t be disappointed. In the meantime, here are a few of my favorite quotes from season one:

10) Lucious: “Effective immediately your contract with Empire is terminated. Because she’s right, your lyrics suck.”

8) Agent Carter: “Is there a bathroom around here?”

7) Jamal: “You can keep that song and your money. My obedience is no longer for sale.”

5) Cookie: “The streets ain’t made for everyone, that’s why they made sidewalks.”

3) Anika: “Now I know you been in jail for a minute, but do you even know what a debutante is?”

Cookie: “A bougie ho with a lot of money?”

Anika: “A ho who can slice your throat without disturbing her pearls.”