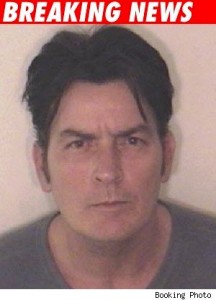 After two decades of bad behavior with no consequences in terms of his popularity and ability to work, everything changed yesterday when Charlie Sheen’s extremely popular television show Two and a Half Men was canceled for the season.  The cancellation was due to Sheen’s extended rant on the Alex Jones Radio Show on which he discussed his mental curing abilities, ninja training and magic fingertips.  The most consequential part of Sheen’s rant was his verbal lashing of Two and a Half Men creator Chuck Lorre — whom he later challenged to an ultimate fighting match.

Sheen’s craziness inspired me to list the 10 nuttiest celebrities in Hollywood.  Here we go….you can’t make this shit up!

1) Charlie Sheen – Although this is the abridged version, Sheen’s rap sheet makes the Robert Downey Jr. of the 90s look like a saint:

• Feb. 23, 2010: Sheen voluntarily checks himself into rehab, a move his rep referred to as simply a “preventative measure.”

• 2009: Sheen is arrested on felony menacing charges and spends Christmas in a Colorado jail after wife Brooke Mueller tells cops the actor threatened her with a knife. Sheen ended up pleading guilty to misdemeanor third-degree assault and was ordered to spend 30 days in rehab, undergo domestic abuse counseling, and was placed on probation.

• 2005: Denise Richards files for divorce and publicly accusing Sheen of carousing with prostitutes and gambling, while discussing his drug and alcohol problems.

• 1998: Sheen enters lockdown rehab after being hospitalized for a drug overdose which was necessary after his father, Martin Sheen, turned him in for violating his parole.

• 1997: Sheen pleads no contest to battery charges brought by former girlfriend, model-actress Brittany Ashland, who claims Sheen threw her onto his kitchen floor and split her lip. He earned a year’s suspended sentence, two years’ probation and a $2,800 fine.

• 1990: Sheen accidentally shoots then-fiancée Kelly Preston in the arm. That same year he enters rehab for the first time to treat an alcohol addiction.

2) Mel Gibson – Being anti-Semitic is completely unacceptable.  End of story.

3) Lindsay Lohan – When you steal, get caught doing drugs, are in and out of rehab and constantly find yourself in court you could call yourself Charlie Sheen – that is if you actually made money being an actor.  Go away Lohan.  Just go away.

5) Naomi Campbell – Just because you’re pretty doesn’t mean you can throw things at people.  Put down your copy of Mean Girls before you hurt another assistant.

6) Michael Richards – Being racist is completely unacceptable.  End of story.

7) David Hasselhoff – There is a reason why Comedy Central chose you to be the latest idiot celebrity to be roasted.  Actually there are several reasons which include but are not limited to: Baywatch, self-tanner, the drunken cheeseburger home video, Knight Rider and calling yourself “The Hoff.”

9) Britney Spears – Shaving your head and then attacking members of the paparazzi with an umbrella doesn’t exactly make you the best role model for your kids, nor does it make the public like you.  Thank you for getting your act together – or at least your public image – so the world could move on to other crazies.