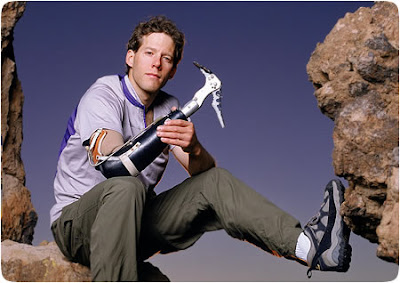 In May 2003 Aron Ralston was climbing in Utah when his right arm got lodged under a boulder, crushing his arm and pinning him against the canyon wall. After realizing that no one would be looking for him since he hadn’t told anyone about his hiking plans, he knew that he was in trouble.

Ralston spent the next five days slowly sipping his small amount of remaining water while trying to dislodge his arm but his efforts were futile. He eventually ran out of water, began drinking his own urine, carved his name, birthday and presumed date of death into the canyon wall and videotaped his last goodbyes to his family. Left with no more options and running dangerously low on time and sanity, Ralston used a dull knife to cut through his arm.

Miraculously, he was able to free himself and began hiking to his car in the hot midday sun. While hiking out, he encountered a family of three on vacation who alerted the authorities. Just as the search helicopter was turning around to fuel up, they spotted Ralston and the family.

To say that this story is heroic, ballsy and inspiring is an understatement. Ralston, a graduate of Cherry Creek High School in Denver and a Carnegie Mellon University student at the time, saved his own life against all odds. The pain he must have went through to cut through his own arm with a dull knife must have been unimaginably agonizing, not to mention he hadn’t had water or food for several days and was baking in the sun.

As far as I’m concerned, Bear Grylls has nothing on this guy so it makes sense that someone would want to make a movie about him and that person is Oscar-winning director Danny Boyle (Slumdog Millionaire). 127 Hours hits theatres on November 5 and James Franco plays Ralston. The movie will chronicle the excruciating period of time Ralston spent trapped alone as his panic and desperation increased.

I’m glad that this movie is being made because my mother actually sat next to Ralston on a shuttle driving from Denver to Vail and he told her all about what happened. My mother then told my grandmother about him and not too long after my grandmother fell in her house in Miami and broke her femur bone. My grandmother later told my mother that Ralston’s story inspired her to crawl to the front door and call for help. If that’s not the definition of inspiration I don’t know what is.