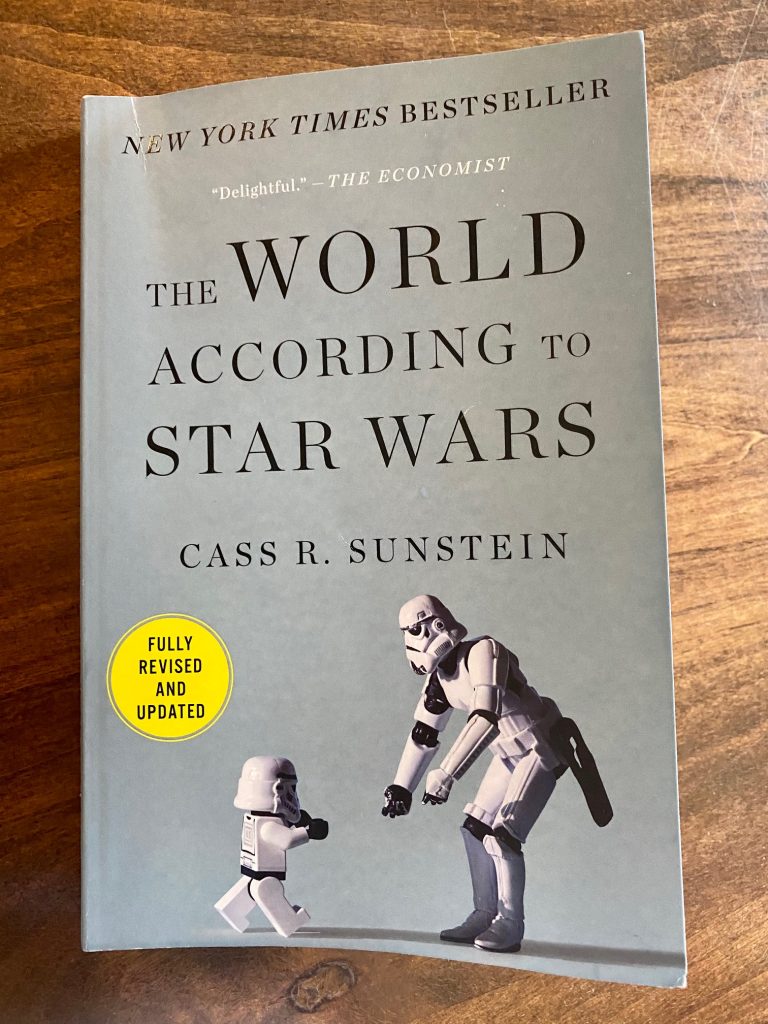 Back when shopping at a bookstore in a small town was a standard thing to do, I walked by The World According to Star Wars a few times before picking it up. I’m not a Stars Wars fan – and by that, I mean I don’t care that much about it. A friend from college forced (see what I did there) me to watch the original three movies on VHS, but that is the extent of my intentional viewing. Over the years I have seen snippets of the other Episodes here and there because my significant other is (obviously) a fan. But I kept coming back to the book because a) I noticed it was a New York Times bestseller and b) I decided there has to be a reason (beyond the seemingly endless fanboys and girls out there) that Star Wars has stood the test of time for so many decades and I wanted to know why. In short – I decided to read Cass R. Sunstein’s book because I wanted to understand what all of the fuss is about – an annotation I wrote down before I began reading. Also, Sunstein is a Harvard professor who founded the university’s Behavior Economics and Public Policy program, and was the administrator of the White House Office of Information and Regulatory Affairs for Obama so clearly he is a smart guy.

With trepidation, I cracked open the book and from the first line in the Preface, it’s evident that Sunstein gets it. He writes, “The human race can be divided into three kinds of people: those who love Star Wars, those who like Star Wars, and those who neither love nor like Star Wars.” I laughed out loud because I, like the author’s wife apparently, fall under the third category. In the first paragraph of the Introduction, Sunstein grabs my attention when he breaks down the amount of money the Star Wars franchise has earned: “The total exceeds the gross domestic product of about ninety of the world’s nations, including Iceland, Jamaica, Armenia, Laos, and Guyana.” Wow. Also in the Introduction, the author explains that Star Wars both “unifies people” and “connects generations” and “is obsessed with the complex relationship between fathers and sons, and with what they will do for each other.” Other main themes include forgiveness, redemption, and freedom.

Throughout the book, Sunstein highlights pop culture, sociological, and economic points based on the success of the franchise, and the public’s reception (and perception) of Star Wars. He talks about how within twenty-four hours of The Force Awakens trailer being released in 2015, it was viewed 88 million times which was an all-time record. The question is whether people were more interested in the actual trailer or being able to talk about it with others. While I agree with most of his points about the massive and undeniable cultural effects of Star Wars, one argument I disagree with is when he talks about the importance of products arriving at the exact right cultural moment in terms of Bob Dylan’s “Blowin’ in the Wind,” “A Hard Rain’s A-Gonna Fall,” and “Like a Rolling Stone,” which were all released in the 1960s. Sunstein claims that those songs were so significant because they fit well with the time they were released and that they wouldn’t have worked in other decades. But Dylan released those songs in the 1960s because he was writing about what was happening in the country at the time – it was not some “timing is everything” situation. He was literally writing about what everyone in America was witnessing/experiencing.

Although Star Wars is seen by some people as overrated and too sci-fi, others believe that the stories offer a great deal of relatability. I get that the relationships make an impact – Luke and Darth Vader, Han and Leia, etc. – but why these specific relationships? Do a lot of people like these movies because there’s something for everyone including adventure, romance, and rebellion? Sunstein analyzes political scientist Susanne Lohmann’s argument that “societies can be sorted into different groups, with different thresholds for taking action.” According to Lohmann, some people will rebel to rebel, others will rebel only when they reach a certain level of outrage, and a third group will rebel only if they believe the rebellion will be successful. I thought the analysis was interesting, especially in our current political climate, because it speaks to what gets people’s blood going and why which I have always found fascinating. Why do some things outrange certain people and not others? What causes the tipping point?

Speaking of our current climate, in the final chapter of the book, Sunstein talks about how 1977 was a time when America needed “an upbeat tale about heroes, hermits, droids, and lightsabers.” History is repeating itself as 2020 has proved to be a time when this country needs the same. As I explained in the first paragraph of this review, I wanted to know what all the fuss was about and on page 181 Sunstein blatantly says: “Whenever there’s a big fuss, most of us want to know what it is all about. There’s a deep human desire for common knowledge and common experiences.” Exactly. Also applicable to what Americans yearn for right now: “Nations need celebrations and events that diverse people can share; holidays, movies, television shows, and sporting events provide them. The release of a new Star Wars movie is a national celebration.”

But as someone who is barely aware of when a Star Wars movie is released, I do comprehend that the stories “invite disagreements and obsessions” and that freedom of choice is an important lesson that runs through all of the Episodes. I may never fully understand the power of the Force, but I now understand why Star Wars means a lot to a wide array of people for a variety of reasons and there is something to be said about that. Clearly, Star Wars fans will love this book. I’m happy to report that someone who isn’t a fan found Sunstein’s analysis entertaining, intelligent, thorough, and persuasive.

“Drawing on westerns and 1960s comic books, committed to liberty, and audacious about hope, Star Wars is bipartisan and All-American.”

Lucas spoke about his plan for “The Star Wars” as “a western movie set in outer space” or “a Flash Gordon kind of science fiction movie.” I find that tidbit hilarious.

A New Hope opened on May 25, 1977 in only 32 theaters but it broke records in nine of them. By September, it became Twentieth Century Fox’s most successful film which resulted in the studio’s stock jumping from $6 a share to $27 a share.

Lucas survived a near-fatal motorcycle accident in 1962 and machines helped keep him alive which arguably is the reason “for his focus on the symbiotic relationship between human beings and machines.”

Harrison Ford was a 35-year-old carpenter who happened to be working on the Star Wars set. Out of nowhere, Lucas decided to have him audition as Hans Solo. Talk about small decisions leading to big impacts.

“The truth is that the best designers tend to be improvisers.”

“After the terrible tumult of the 1960s – the assassinations of two Kennedys, of Martin Luther King Jr., of Malcolm X – a new hope was exactly what people wanted. Lucas handed it to them on a silver spaceship.”

“Star Wars doesn’t tell you what to think. It invites speculation.”

“It’s pretty safe to say that Star Wars criticizes centralized authority, and its rebel heart lies with those who try to resist it.”

“Conservative rebels can be especially effective, because they pull on people’s heartstrings. They connect people to their past, and to what they hold most dear.”

“The enduring triumph of Star Wars is that it takes a familiar tale, built into disparate cultures and psyches, sets it in a wholly unfamiliar setting, makes it effervescent and fresh, and gives it a series of emotionally daring twists…Our modern myth is both a spiritual quest and a psychodrama, insisting that redemption is always possible, that anyone can be forgiven, and that freedom is never an illusion.”

“Star Wars is here to say. Timing is everything, and luck matters.” No truer words.