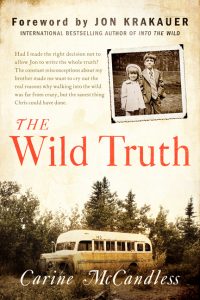 Sometimes the truth needs to come out and that’s exactly what Carine McCandless, sister of notorious Alaskan hiker Chris McCandless, set out to do by writing her book The Wild Truth. Published in 2014, eighteen years after Jon Krakauer’s Into the Wild, which tells the story of McCandless’ ultimately fatal trek from Virginia to Alaska, Carine’s book explains why her brother left home. To say the two siblings grew up in an abusive household is an understatement as Carine discusses her father’s polygamous lifestyle, which he continues to deny and lie about, and the physical, mental, and the emotional abuse that both wives and all eight McCandless children endured. Carine’s mother wasn’t any better as she was the epitome of an enabler and emotional abuser who constantly rewrote history and made her children feel like they were crazy for remembering, and sometimes bringing up, all the horrible abuse they dealt with throughout their entire childhood. It’s horrifying and complicated and incredibly frustrating.

The saying goes that no family is perfect but, at some point, deception of this level runs so deep that people need to decide whether they are going to cater to crazy or cut the cord. Chris McCandless cut the cord. When Krakauer interviewed Carine about Into the Wild during the months following Chris’ death, she told him about her insane family dynamic but asked the author to refrain from including all the gory details in the book. I understand why she didn’t want the world to know about her family’s dirty laundry, and why at such a young age she naively thought the damage was repairable, but in hindsight she admits that she should have let Krakauer tell the whole truth. Why? Because by honoring Carine’s wishes and leaving out all the terrifying details, Krakauer’s book made Chris a polarizing figure who some viewed as a young man whose rebellious and foolish choices cost him his life rather than as someone trying to escape.

When I first read Into the Wild, I was a senior at the University of Colorado so the book had been in existence for ten years. I remember being enthralled by Krakauer’s account of Chris’ journey and I recall our class discussions about whether Chris was selfish and destructive or brave and free. Almost ten years later, I read the book again because I was assisting with teaching it to a Colorado Mountain College English class. Our weekly discussions were pretty similar to the ones I had in college, and I found it fascinating how many students thought Chris was selfish rather than brave. Clearly, we didn’t know the whole story.

Now that The Wild Truth has shined a light on the turmoil she and Chris (and their six siblings) endured, Into the Wild should never be taught the same way again. No longer should teachers ask their students if they thought Chris was brave or selfish to venture into the wild because now we know that he was removing himself from the physical, emotional, and mental abuse of his horrifying parents. I’m not sure how much help Carine had from Krakauer, but her writing is impressive. Her descriptions allowed me to easily picture what was going on in her life at the time and how she got through, and continues to come to terms with, her brother’s death. Carine also mentions several times that she and her siblings never really understood why Chris’ story inspired so many people. Even though Krakauer’s initial story (which was published in Outside magazine in 1993) garnered more letters than any other piece in the magazine’s history and Into the Wild became worldwide success, she still didn’t totally get it and at first I didn’t completely understand it either. I thought to myself: Maybe it’s Krakauer’s phenomenal writing or maybe readers are attracted to the mystery of a kid who seemed to have it all but lost faith in society. After reading Into the Wild the second time, I realized that the people who consider Chris to be brave are attracted to the higher purpose of his journey and willingness to get out of his comfort zone in search of happiness. It’s also, without a doubt, Krakauer’s incredible knack for storytelling.

Decades after this death, Chris’ story continues to resonate with the world. Into the Wild is an international bestseller and has inspired thousands to literally walk his footsteps and see the now famous Bus 142 where Chris spent his final days. In December 2013, a year before Carine’s book was published, Outside published an article called “The Chris McCandless Obsession Problem” that talks about people risking injury or death to visit his Alaskan spot. Fast forward to 2017 and The Wild Truth has already earned New York Times bestseller status. I wonder if people will still be talking about Chris in another ten or twenty years.

Overall, Carine’s story is captivating – once I picked the book up I couldn’t put it down. I felt like I was reading a Behind the Music-type backstory about the making of the Into the Wild book and movie. I saw the film in a tiny theater in Denver when it came out in 2007 – Emile Hirsch was fantastic, Sean Penn did a great job directing, and Eddie Vedder provided the entire soaring soundtrack. Before reading The Wild Truth, I had no idea that Carine had played such a vital role in the creation of both the book and the film but after reading her book it makes sense. Carine and Chris were more than siblings – they were best friends and soulmates. Towards the end of her book, things get a little redundant. How many times can Carine and her siblings forgive their parents? How many more chances will they give them to act like normal humans? Is everything a sign about Chris? At 282 pages, the book is also a bit too long. While I did want to know about Carine’s life and how things turned out for her, there were way too many details about various situations or people in her life that could have been omitted. That being said, Carine’s journey with her parents was almost as harrowing as Chris’ journey (in a different way of course) as she refers to her tumultuous relationship with her parents as “the war.”

If you’ve read Into the Wild, definitely read The Wild Truth. Even though decades have passed, everyone should know the real story behind why Chris McCandless walked into the wild.