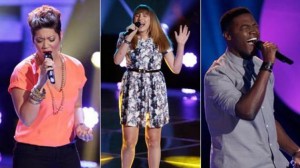 Tonight’s elimination episode, which brought the number of contestants from 12 to 10, was bizarre to say the least. Here’s why:

-Team Adam’s two nerds survived another week. I can’t stand the Killers’ “Mr. Brightside” and James Wolpert made me hate the song even more.
-Although I’ve always liked Matthew Schuler from Team Christina, he absolutely solidified his spot on the show when he brought everyone to their feet with his rendition of “Hallelujah.” Holy goose bumps. He totally deserved to be announced second.
-While I think Tessanne Chin is going to have a hard time shaking the endless Rihanna comparisons, her voice is undeniable. Good call keeping her.
-It’s shocking how obsessed America is with Caroline Pennell. She has been called first by Carson Daly the last two eliminations and although I think she has a very unique voice I think that fellow Ceelo teammate Kat Robichaud has a way bigger voice and infinitely bigger stage presence – hell yeah crowd surfing!
-Speaking of Team Ceelo, I can’t believe America eliminated Jonny Gray – I thought for sure he was a frontrunner since he’s been consistent throughout the entire season. Bad move America!
-I love Blake Shelton as much as the next person but I’m shocked that all three of his dudes made it through to another week. I like Ray Boudreaux (his version of Marc Brussard’s “Home” last week was awesome) but having him sing a John Legend song was a big risk. I think he’s lucky to still be on the show.
-And the most bizarre part of the night: What was the deal with the random “instant save” via Twitter announced by Carson? First of all, by the time those of us living in Mountain Standard Time had a chance to watch the episode “live” meant previously recorded and the ability to save an artist via Twitter was already closed. What the hell?