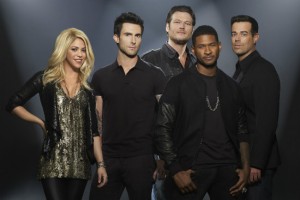 Tonight marked part one of another exciting premiere for my favorite singing show! Here’s a little play by play with commentary in case you missed it:

-All four judges sang “Come Together” to kick off the show and it was awesome. Adam Levine on drums! Usher can play guitar? Blake Shelton holding back on the twang! Shakira on harmonica? Yes!
-The Morgan Twins – seriously? Blake nailed it – they were a Doublemint commercial. These girls showed up in tight red dresses, holding hands, finishing each other’s sentences. Tall, thin, blonde, beautiful, with huge boobs and they could sing and harmonize really well! So well, in fact, that it was hard for the coaches to tell whether it was two people or one person auditioning.
-I felt like Usher was hitting on every girl contestant while Blake and Adam were hosting their own little comedic variety show. Very fun to watch!
-The next two contestants were great too –as per usual with The Voice the talent rolled on.
-Even the contestants that didn’t get picked were good. As in they were so good they could win any other singer competition on television.
-Usher wasn’t afraid to bribe a very talented 16-year-old Taylor Swift wannabe with Justin Bieber tickets. Not kidding.
-“Sexy And I Know It” as a baritone rock song with an acoustic guitar? Yes please. Christian Porter reminded me of Melanie’s blind audition from last season when she toned down “Toxic” and blew the roof off the place. This kid is a contender.
-A male competitor sang a Whitney Houston song like his life depended on it and fooled everyone – except Shakira! Colombia 1, America 0. Adam, Blake and Usher = mind blown.
-All of these contestants have real jobs and some have suffered some real tragedy. Not in a sensational or cheesy way – in a real way.

The grand finale of the night:

-Michael Jackson’s female vocal partner from This Is It whose name everyone in America now knows – Judith Hill – may win this whole competition. Not only did she trade verses with the King of Pop on This Is It but she also sang “Heal the World” at his memorial service. Two notes and two of the judges turned around. By the time she was halfway through her song all four chairs turned around and all four jaws were on the ground. You have never seen such lobbying for a singer: Adam Levine said, “You are the first person to come on this show and do a Christina song as well as Christina Aguilera.” Judith ended up choosing Adam as her coach – and with that choice she may have sealed the season four deal for Mr. Levine.

Part two of the premiere is tomorrow night so set your DVRs kids – it’s going to be a barn burner.