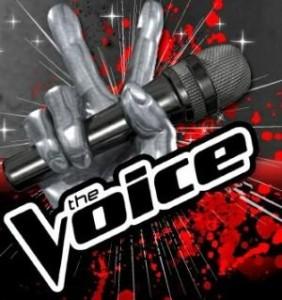 Have you seen this show before? I hadn’t until tonight.

I knew the premise: A singing competition based on voices rather than “the whole package” and the judges were Maroon 5’s Adam Levine, Cee-Lo Green, Christina Aguilera and Blake Shelton. When I heard about this show I thought to myself: a) What an interesting group – a pop artist who wishes he was a rocker, the incomparable force behind Goodie Mob and Gnarls Barkley, super diva X-tina and Mr. Miranda Lambert. b) This show is clearly going to be compared to American Idol and I wonder how it will fair.

Oh and please don’t let me forget that the person playing the Ryan Seacrest role is Carson Daly. As far as I’m concerned they might as well be the same person. Boring but likable. I guess.

Anyway, after watching tonight’s episode I found out a few things I didn’t know about the show that surprised me. I had no idea the judges sang together at the beginning of each show. Tonight they performed a medley of Prince songs and I loved it! Watching Cee-Lo cover “Little Red Corvette” was amazing. Another aspect of the show I was unaware of is that in the initial auditions the judges push their button if they like what they hear. If more than one judge pushes their button the performer then must choose which artist will be their “coach.” Kind of interesting that the person auditioning gets to make a decision for once.

After the first round of auditions, each team of singers is mentored and developed by its respective coach. Then the coaches have two of their team members battle against each other by singing the same song together, with the coach choosing which team member to advance. The surviving four acts from each team again compete head-to-head, with public votes determining who will advance to the final eight.

What are they competing for? $100,000 and a recording contract. Not too shabby.

So how does The Voice stack up again American Idol? The talent is better on the former and they don’t allow any cheesy and/or embarrassing singers on the show just for shock value. There are definitely singers that don’t get picked but it’s not because they are eye-rolling horrible – it’s because they just didn’t have what the coaches were looking for. Fair enough. I also think that the song choices are way more interesting on The Vocie and although they both take the backstories a little too far it’s not as bad on this show.

But it’s by no means perfect. The coaches can’t possibly think that viewers at home don’t notice that they are boozing while judging. Also, if Aguilera has any more plastic surgery I think she is going to turn into a blowup doll.

Either way, I’m looking forward to seeing how the season goes and if I can stomach watching two singing competitions. So glad I have a DVR.