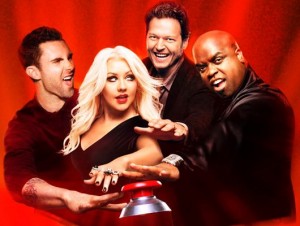 I forgot how much I missed this show until tonight’s season three premiere. Here’s why The Voice elicits more excitement than the rest:

– The talent that comes on this show is undeniable. Period. It make American Idol and every other singing competition on television look like a middle school talent show.

-These judges are as impressive as they are diverse. Did you see their rendition of “Start Me Up” to kick off season three? You can’t deny the musical prowess of Adam Levine, Cee-Lo Green, Christina Aguilera and Blake Shelton but if you have any doubts at all Google them and see how many awards they’ve won and how many records they’ve sold. Thanks for playing.

-The variety of both the contestants and judges on this show makes all the difference. Country, pop, rock and roll, reggae, hip hop, and I could go on and on because it’s all there.

-Compatibility is key and the judges have that. They are funny, they joke around with each other and honestly look like they are having a good time rather than just pressing buttons, spinning in chairs and collecting paychecks.

–The Voice is staying ahead of the curve and ahead of the game by constantly changing things up. For example this season features new twists such as the coaches having the ability to “steal” vocalists from other coaches during the battle rounds, allowing a second chance for a contestant who’s about to be cut. There will be a “knockout round” during which the 10 contestants on each coach’s team will be whittled down to just five participants — so only 20 singers will take the stage when the live performance rounds begin.

-New faces always are always welcome and the show is wisely bringing in new advisors to help the coaches: Green Day frontman Billie Joe Armstrong will work with Aguilera, Michael Buble will team up with Shelton, Mary J. Blige will help Levine and Matchbox 20 singer Rob Thomas will work with Cee-Lo.

If tonight’s first round of blind auditions are any indication, this season will be as exciting as the previous two seasons and I can’t wait to watch. If you want to see some of the most incredible, raw music talent out there you should watch too.