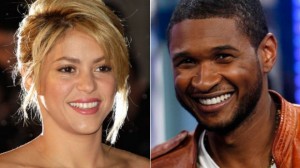 Have you seen the new commercial for The Voice that introduces new judges Shakira and Usher? It’s hilarious. Watch first and then continue reading.

The four of them singing along to a blaring rendition of “Total Eclipse of the Heart” in Blake Shelton’s truck with Adam Levine in shotgun? Hilarious! And then Carson Daly pulls up next to them and drives away quickly because he’s clearly embarrassed for them? Absolutely brilliant.

So the marketing is brilliant but how will the new judges go over? While sources say Shakira and Usher are temporary replacements and that Christina Aguilera and Cee Lo will be back, one never knows if that’s actually true.

As I’ve said before I think one of the biggest reasons The Voice has been so successful over the last three seasons is the undeniable chemistry between the judges. They obviously enjoyed what they were doing and gave quality advice to their team members. While I think Aguilera has a huge voice and is very talented I’m glad she’s on hiatus. Her snarky comments were getting old and her inability to find pants to wear was confusing and annoying. I will definitely miss Cee Lo as I think he attracted quirky talent and I loved seeing what crazy outfit he was going to wear next.

That being said there is nothing wrong with new blood and varying points of view which hopefully Shakira and Usher will offer. I’ve always liked Shakira – she fuses rock and roll with her Colombian background and can dance like no one else in the business. She also speaks several languages and I like that she seamlessly combines English and Spanish in her songs while still making them approachable for the average listener in Idaho who has never met someone from Latin America. Shakira has won many awards including two Grammys, eight Latin Grammys and seven Billboard Music Awards. She was nominated for a Golden Globe, has a star on the Hollywood Walk of Fame and she is the highest-selling Colombian artist of all time, having sold between 50 and 60 million albums.

Usher, on the other hand, is not my favorite. Although he is a phenomenal dancer I think his music is mediocre at best but clearly not everyone agrees with me as the RIAA ranks Usher as one of the best-selling artists in American music history, having sold over 23 million copies in the United States alone. To date, he has sold over 65 million records worldwide and has won numerous awards including eight Grammy and has attained nine Hot 100 number-one hits (all as a lead artist) and has 18 Hot 100 top ten hits.

So clearly they are successful but can they judge? Tune in on March 25 and find out!