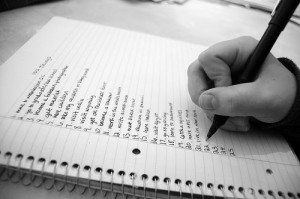 With the help of four very valuable and creative contributors I have compiled the ultimate bucket list.  Take a look and count how many you’ve already done and how many you’d like to do.  I’m VERY interested in your responses!  Have fun!

2. Home brewed your own beer/made your own wine

4. Dyed your hair an unnatural color

5. Pierced something from the neck down

7. Witnessed a peacock spread its plumes

8. Built something from scratch

9. Killed, cooked and eaten an animal

12. Gotten into a fight with a total stranger (verbal or physical)

13. Volunteered in a foreign country

17. Asked someone to marry you

18. Ridden in a police car (for fun or under arrest)

22. Hitchhiked or picked up a hitchhiker

24. Ridden in an ambulance

26. Eaten the worm in a tequila bottle

27. Swam in the Atlantic and Pacific oceans

28. Purchased something for yourself you couldn’t afford

29. Smuggled something onto an airplane

32. Gone to a movie by yourself

35. Gone to a professional football, basketball, baseball and hockey game in the same year

37. Watched an entire season of a television show in one sitting

39. Been interviewed at a concert or sporting event

40. Lied about your name or age in a bar

41. Beat an English major in Scrabble

42. Actually finished a game of Monopoly

48. Seen a double feature at the movie theater