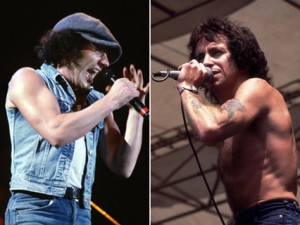 If you’re a fan of AC/DC there are a few things you know for sure: 1) They are one of the greatest rock and roll bands of all time.  2) Their hits will always get people excited.  3) They assured us that rock and roll ain’t noise pollution. 4) They’ve had two singers over the years that are so good and so similar that it’s extremely difficult to distinguish who is singing which song.  So, here is a little trivia for all the AC/DC fans out there:

Original lead singer Bon Scott was born in Scotland before immigrating to Australia in his childhood.  He was AC/DC’s captivating front man from 1974 until his death in 1980.

After passing out in the car on the way back to friend Alistair Kinnear’s house after a night of heavy drinking in London, Scott was left in the car.  Since Kinnear was unable to move him, Scott was left in the car overnight to sleep off the effects of the alcohol.  Unable to wake Scott the next morning, Kinnear rushed him to the hospital where Scott was pronounced dead on arrival.  Pulmonary aspiration of vomit was the cause of Scott’s death and the official cause was listed as “acute alcohol poisoning” and “death by misadventure.”

If You Want Blood (You’ve Got It)

After Scott’s death the band briefly considered ending AC/DC but then decided that Scott would have wanted the band to continue.  They auditioned several candidates for his spot but a few days after hearing Brian Johnson sing “Whole Lotta Rosie” from Let There Be Rock and Ike & Tina Turner’s “Nutbush City Limits” he was hired.

A few months later, AC/DC, with Johnson on the mic, recorded Back In Black, which would turn out to be their biggest-selling album ever.  The album was certified platinum three months after its release, and by 2007 it had sold more than 22 million copies in the United States and over 45 million worldwide, making it the fourth highest-selling album ever in the US and the second highest- selling in the world.  Johnson had made his mark and had showed the music world that AC/DC could continue on.

You Shook Me All Night Long

For Those About to Rock (We Salute You)

AC/DC was inducted into the Rock and Roll Hall of Fame in March 2003.  In 2009 the Recording Industry Association of America (RIAA) upgraded the group’s US sales figures from 69 million to 71 million, making AC/DC the fifth best-selling band in US history and the ninth best-selling artist, selling more albums than Madonna, Mariah Carey and Michael Jackson. The RIAA also certified Back in Black as double Diamond (20 million) in US sales.