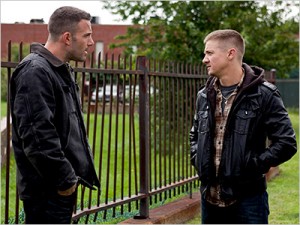 As far as bank robber movies go I would say, without a doubt, that I’m a fan.  Point Break, The Italian Job, The Dark Knight, Ocean’s Eleven – all heist movies, all awesome.  And Ben Affleck’s The Town is no different.  Taking place in hardcore Boston – a setting for some of my other favorites like The Departed and Good Will Hunting – the action never stops in this move and trust me, you don’t want it to stop.

Affleck plays local kid Doug MacRay who got drafted to play pro hockey but then chose drugs over an athletic career.  As a result he turned out just like his father (played brilliantly in one scene by Chris Cooper) and became a bank robber.  But unlike his father, who is serving time in prison and will be there for seemingly forever, Doug is looking to get out of the criminal life and get out of town.  In the meantime he hangs out with three friends and literal partners in crime including best friend James “Jem” Coughlin, played with angst and rebellion by the amazing Jeremy Renner, Owen Burke who is from New England and Slaine who is a Boston-bred, Irish-American hip hop MC and actor.  Jem would do anything for Doug, never met a drug or drink he didn’t like and never shies away from a fight.

“Doug MacRay: I need your help. I can’t tell you what it is, you can never ask me about it later, and we’re gonna hurt some people.
[Jem pauses to think for a moment]
James Coughlin: Whose car are we gonna take?”

These guys pull off bank robberies with finesse and precision while wearing rubber masks that are reminiscent of Point Break’s “Ex-Presidents” – except these guys switch up their masks going from skeletons to nuns.

The first bust turns out to be the most important because we are introduced to bank manager Claire (the fantastic Rebecca Hall) who ends up being Doug’s love interest.  She doesn’t know that Doug is the one who held her at gunpoint and robbed her bank so they begin dating.  It starts off as a way for Doug to make sure she doesn’t say too much to the FBI but it turns out he actually falls for her.

Another excellent performance is given by Jon Hamm who plays FBI Special Agent Adam Frawley.  This guy is no joke – he is out to get Doug and his crew and will not stop until they are dead or behind bars forever.

[To the team of police officers]
“Adam Frawley: Where are they? What are they doing right now? They got the money, now they have to clean it. Casino’s, tracks, maybe they make a big drug buy, flip it across town. They wanna go celebrate, right? V.P.D, D.E.A. I want chips, names, witnesses. Anything. We’re gonna knock on some doors see who wants to help us out. Any questions? No. Great. Let’s go.”

When Doug and company aren’t robbing banks and running drugs the guys also hang out with Jem’s sister Krista (played by Blake Lively) who has an affinity for cocaine and oxycontin and also has a young daughter.  From watching the previews I thought Lively would have more screen time but she does make good use of the little time she is given.  Though her character is a cliché, she exemplifies the “townie” type person who is a young mother, into drugs and booze, wears tights clothes and has smeared makeup – essentially the Boston version of Courtney Love.

While the final 30 minutes of the movie are pretty predictable – final robbery goes wrong and people die – Affleck (who starred in and directed this movie) went big and decided to make the final bust take place at “The Cathedral of Boston” – Fenway Park.  Very cool and very appropriate considering how big the Red Sox have been over the last few years.   But that’s how this entire movie played out – very cool and very well done.  I think Affleck has finally shaken the Jennifer Lopez bullshit and is back making good movies about a town he knows very well.   While The Town proves you can never and may never want to go home again, it sure is fun watching these guys try.