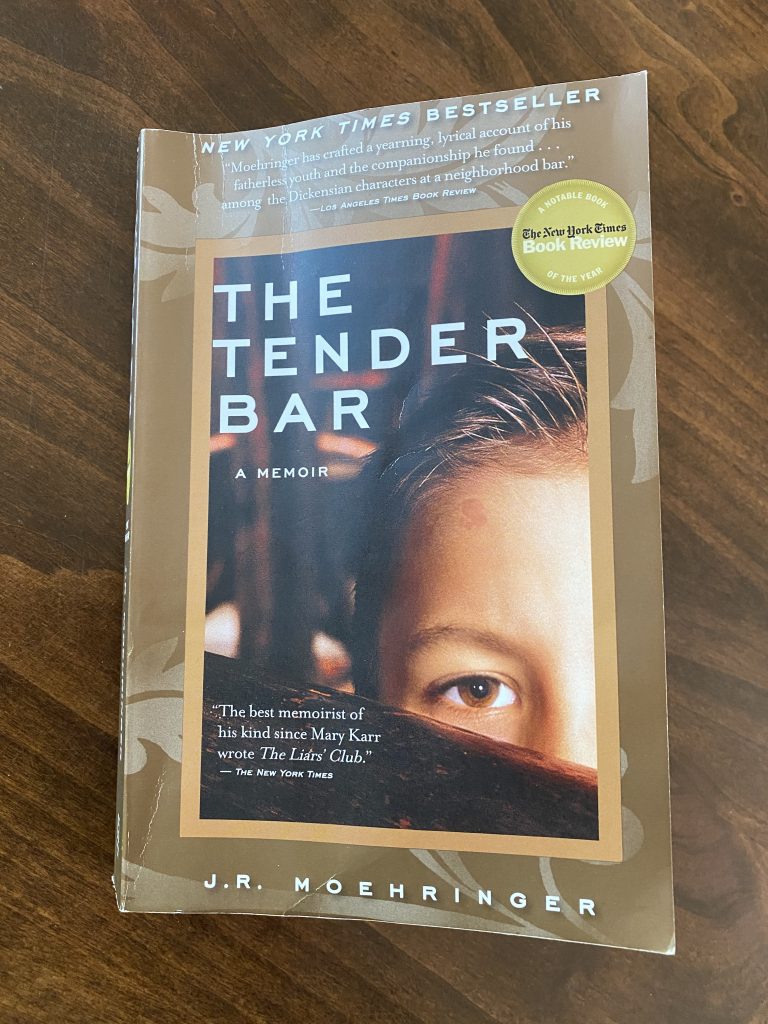 Last month I wrote about Andre Agassi’s memoir, Open. In my review, I mention a few major themes: 1) He hates tennis but no one believes that he hates it. 2) Like several of the biographies, autobiographies, and memoirs I’ve read, Agassi’s starts with a son of a bitch father. 3) His hair – a physical trait he despises and unfortunately can do nothing about – takes up a great deal of his mental space. I also talk about Agassi using one of my favorite writing styles – short, thoughtfully written sentences that are full of meaning. Just like Hemingway. Throughout the book, Agassi’s truncated sentences effectively lend to his funny details and anecdotes. After reading Pulitzer Prize winning author J.R. Moehringer’s The Tender Bar, I know where Agassi got his writing style.

In the last section of Open, Agassi explains that he enlisted Moehringer to help him write his autobiography so after reading Agassi’s book, I read The Tender Bar. And then I realized that Moehringer might be another literary spirit animal. We make similar observations and are both attracted to Hemingway prose. Throughout The Tender Bar, Moehringer makes several references to my favorite Key West author and points out that the male narrators in some of his favorite novels, including The Great Gatsby, The Adventures of Huckleberry Finn, and The Catcher in the Rye (all of which were on the banned books list by the way) mention fathers within the first few pages.

Whereas Agassi’s father was over-the-top involved with his tennis career and forced his son to play (hence Agassi hating tennis), Moehringer’s father didn’t really exist. Except he was everywhere because he was a radio personality. And the constant question Moehringer got from people, “What does J.R. stand for?,” is a thread that weaves throughout the memoir. Moehringer is the best kind of observer because he simultaneously watches people and scenarios unfold and then digs deeper. He digs back to his eight-year-old self, his high school self, his college self, who he was in his twenties, and then to present day which takes place just after 9/11.

While Agassi struggles because his father forced an identity on him, which sets the tone for his entire life, Moehringer struggles because of his lack of identity. His name is attached to his father who abandoned him and, unfortunately, that abandonment also sets the tone for his entire life. And while the book is a memoir about the bar that raised him and the patrons who shaped him, it is also an homage to his mother who was (and I hope still is) the most important and consistent person in his life. His relationship with his mother is sweet and sad at the same time because she does not have the capacity to do everything she wants to do for him. When it comes to Moehringer’s mother, and the other avenues of his life, it’s interesting to read his thoughts about the story he will eventually write. Of course, that hits home.

Although The Tender Bar is full of heartbreak and disappointment, there is also an abundance of hope and redemption. Both confidence and loneliness are major themes but so is the importance of people finding their tribe. And how that tribe changes over time. “They taught me the importance of confidence. That was all. But that was enough. That, I later realized, was everything.” Even as a small child, Moehringer is a sponge. He wants to learn the ways of the world and he wants to learn from the people he meets at the bar.

Moehringer’s writing is outstanding – full of intelligent observations, witty metaphors, and clever nicknames for the people who help him forge his path. Additionally, the author mentions many literary greats including Fitzgerald, Frost, Dickens, Salinger, Faulkner, Kerouac, and the list goes on and on. Moehringer’s respect for words and books begins when he is a child – thanks to his mother – and he is able to make an incredible career out of his passion for both. Before becoming a novelist, he was a newspaper man and I can relate to the way writing and drinking become synonymous for him – especially when most of the people in the newspaper business are men. “Journalism was just the right blend of respectability and rebelliousness.” No truer words. Luckily, I was in my twenties during my newspaper tenure because at 37 I wouldn’t be able to hang.

It would take pages and pages to recount all the quotable gems in this book and even though I want to include every single one of them I won’t – because Hemingway taught me less is more. Moehringer provides brilliant prose like “the moon was wobbling, as if it had been overserved” and then lovingly describes his relationship with books, “I was content to revere them before I could read them.” The way he talks about his mother – “I was always the beneficiary of her restless courage” – with a mix of sweetness and candor is enviable. But I knew the book was going to be good from the beginning because he dropped this line on the first page: “Long before it legally served me, the bar saved me.” And then this, two sentences later, “While I fear that we’re drawn to what abandons us, and to what seems most likely to abandon us, in the end I believe we’re defined by what embraces us.” Yes.

Moehringer has a way with words, a way with descriptions, and a way with painting a picture without using too many adjectives – just the way I like it. And just like Hemingway always did it. His depiction of the people who frequent the bar make the characters come alive. I can visualize the place being “wall-to-wall storytellers” and one of the patrons being a “wholesale supplier of new topics.” I can also picture this person: “Few things gave him more joy than drawing a map on a cocktail napkin.”

Even though the bar functions as its own character in the book, Moehringer clearly knew that simply telling bar stories wasn’t going to win him any awards – or, more importantly, allow him to get his point across. As a result, this book is so much more than stiff martinis, drunken nights, and punishing hangovers. It’s a story about a lifestyle that shaped him and made him the writer he is today. I mean it takes a special brand of writer to pull off a statement that describes someone or something as “both silly and sinister, like a children’s birthday party or a pirate ship.” Solid gold. Fathers, mothers, bars, finding your people, words, writing, newspapers, and the importance of confidence and bravery. No wonder this book hits home.