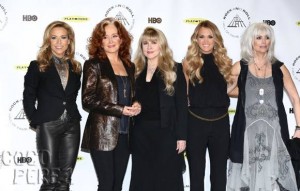 Over the last few weeks I have seen Steve Nicks’s face and name everywhere! It started when she sang Linda Ronstadt hits at the Rock & Roll Hall of Fame induction ceremony along with a few other big names including Carrie Underwood, Bonnie Raitt, Emmylou Harris and Sheryl Crow. Next I saw her on CMT Crossroads performing with Lady Antebellum. Between songs, Nicks and the three members of Lady Antebellum were filmed talking about playing together, singing each other’s songs and what their music means to them. Then yesterday NBC announced that Nicks will assist Adam Levine as a musical advisor for season seven of The Voice which premieres September 22.

Meanwhile, in Fleetwood Mac news, the entire original lineup (including the elusive Christine McVie) will kick off their 34-date “On With the Show” world tour on September 30.

At age 66, it is amazing how well Nicks’s voice has held up considering she joined Fleetwood Mac in 1975 (with Lindsey Buckingham) and began her solo career in 1981. Spanning almost 40 years, her music career has produced over 40 Top 50 hits. Between her solo records and those recorded with the band, she sold over 140 albums.

As a member of Fleetwood Mac she was inducted in the Rock & Roll Hall of Fame in 1998 and won two Grammy Awards. As a solo artist she has been nominated for eight Grammys and holds the record for most Best Female Rock Vocal nominations without a win. Rumors, Fleetwood Mac’s second album after the incorporation of Nicks and Buckingham, was released in 1977 and is the sixth best-selling album of all time.