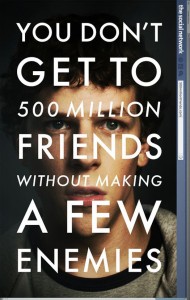 As promised, I finally watched The Social Network.  And you know when the action stopped in that movie?  Never.  For a movie that was supposed to be about computer nerds and people suing each other for millions of dollars it sure felt like a sports movie with all the best highlights.

At this point most people know that The Social Network is the story of how Facebook was created by a Harvard undergrad who, with a little help from his friends, created one of the most important contributions to popular culture.  Not only did Facebook make the term “social media” a household phrase it also turned people’s social lives into something that other people cared about.

What was cool about watching Social Network is that I went through exactly what the students in the movie were going through upon discovering Facebook because I was in college when all of this was going down.  I remember back in 2004 when a friend of mine at the University of Colorado asked me, “Why aren’t you on Facebook?” and I replied with, “What the hell is Facebook?”  A few days later she helped me make a profile and showed me what this new web site was all about.  At that point I wasn’t even on MySpace so the idea of making a profile and typing in my “relationship status” was completely foreign.  As I gathered more and more “friends” it became clear how much I enjoyed checking Facebook and how it became, just like my email account, something I checked at least once a day.  Then came the ability to upload photos, “tag” friends that were in the photos and posting “status updates.” And that was it –I was hooked and so was every other college kid in the country and subsequently the world.

What I didn’t know about Facebook was the background: It was created by Mark Zuckerberg (played brilliantly in the movie by Jesse Eisenberg) and that Napster “founder” Sean Parker helped Zuckerberg by convincing him to move to California and dropping “the” and just calling the site “Facebook.”  I thought Shawn Fanning was the person who created Napster and I was pretty much right – apparently Parker was Fanning’s business partner.  (Sean and Shawn…ridiculous).  Anyway, Facebook incorporated in the summer of 2004 and Parker, who had been informally advising Zuckerberg, became the company’s president.  Currently, Zuckerberg owns 24 percent of the company and Parker owns four percent.

Alright back to the movie – which holds up so well because every character is played perfectly by every actor.  Eisenberg plays Zuckerberg (I know it’s hard to keep all the “bergs” straight) in such a ferociously intense way that at first I wasn’t sure I was going to be able to keep up with the dialogue.  I also initially thought that Zuckerberg might have a social disorder that made him tough to interact with but no – that’s just his personality and Eisenberg nails it.  Meanwhile, Andrew Garfield is mesmerizing as Zuckerberg’s best friend Eduardo Saverin who he ends up totally screwing over.  Garfield is the soul of this movie as he makes the audience feel for him and all the steps he takes to help Zuckerberg achieve something bigger than both of them.  Then there is the phenomenal Justin Timberlake who makes you simultaneously love and hate his Sean Parker who exemplifies the epitome of contradiction.  Parker is motivated and full of ideas but he also has a ruthless side to him – I’m still not sure if he’s a good guy or not.  Armie Hammer (Like Arm & Hammer?  What kind of name is that?) pulls double duty playing the WASPY McWASP twins Cameron and Tyler Winklevoss who also claim they got screwed by Zuckerberg and end up spearheading the lawsuits.  And of course there’s the girlfriend/ex-girlfriend whose presence bookends the movie – we meet her in the very first frame of the movie when she breaks up with Zuckerberg for acting like a verbal nutjob and then the final frame of the movie shows Zuckerberg staring at her Facebook page.  Superb.

So should you see the intricate masterpiece that is The Social Network?  Absolutely. It’s already earned four Golden Globes including Best Picture so it might just be a sleigh ride into the Oscars.  So go right now.  Seriously.  Walk away from the computer and find a way to watch it. The two hours will be done before you know it and you’ll wish the movie was longer.