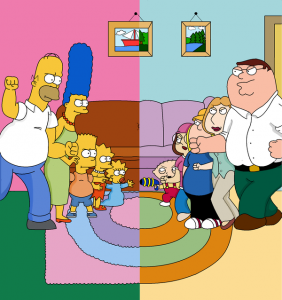 Although The Simpsons and Family Guy have had “feuds” in the past – most of which have had to do with one accusing the other of stealing ideas – the two shows will combine forces in a crossover episode that will air on September 28.

While I’ve always been a fan of The Simpsons, I don’t always think Family Guy is funny. That being said I predict that this episode will be hysterical. Because the two families are so similar – Marge and Lois are both housewives who are eligible for sainthood; Homer and Peter are lazy middle class fathers who are always getting into trouble; Bart, Chris and Stewie are smarter than they appear and semi-dorky daughters Lisa and Meg are cooler than we think – it will be interesting to see them interact.

Which brings up another interesting point – what would it be like to have the casts of your two favorite shows meet? The only other example I can think of is when Grey’s Anatomy and Private Practice did a few crossover episodes and that went really well. Can you imagine the cast of Friends meeting the cast of Seinfeld?! Now that would be amazing.

In addition to the crossover episode announcement, the network also announced two other big pieces of news: 1) The Simpsons will kill off a major character and rumor has it that the person exiting might be Krusty the Clown. 2) The new Simpsons app will allow fans to stream all 552 episodes of the show on their smartphones or tablets. The new app will be available in August, coinciding with the show’s syndicated debut on FXX, FX’s new spin-off network.

That’s a lot going on for a show that has had more celebrity cameos and pop culture references than any other show in the history of television. I’m glad they are spicing it up and I will definitely be tuned in on September 28. Here’s to season 26!