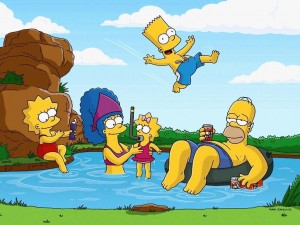 I can’t believe that The Simpsons is almost as old as I am. And what’s even more shocking is that even in its 25th season it’s still a great show. So great, in fact, that it recently was renewed for a 26th season on Fox.

Last night was the annual “Treehouse of Horror” episode and this year’s theme was a nod to Dr. Seuss. As always it was well-written, witty and very entertaining. Growing up I watched the show all the time with my cousin Marshall – he has seen every episode – and even as a kid I recognized the clever and creative writing. I’m glad I still get to enjoy new episodes as an adult because almost three decades later the writing is as sharp as ever.

Created by Matt Groening, The Simpsons parodies American culture, society, television and many aspects of the human condition through animated characters that never age. Groening created a dysfunctional family and named the characters after members of his own family, substituting Bart for his own name. The shorts became a part of The Tracey Ullman Show in 1987. After a three-season run, the sketch was developed into a half-hour prime time show and was an early hit for Fox, becoming the network’s first series to land in the Top 30 ratings in a season (1989–1990).

Since its debut in 1989, the show has broadcast 531 episodes and paved the way for other animated parodies like South Park and Family Guy years later. The Simpsons is the longest running American sitcom, American animated program, American primetime and scripted television series and has left an impressive mark on pop culture. Time magazine’s December 31, 1999 issue named it the 20th century’s best television series and in January 2000, the Simpson family was awarded a star on the Hollywood Walk of Fame. It has won dozens of awards since it debuted as a series, including 27 Primetime Emmy Awards, 30 Annie Awards and a Peabody Award. Even Homer’s catchphrase “D’oh!” has been adopted into the English language.

While there is clearly no end to The Simpsons in sight, there has been talk of killing off a major character next season which is something the show has never done. Because the show is animated, Groening has been able to get away with an eclectic and large cast that never gets older. It’s like seeing a band that continues to release amazing records, always plays successful shows, never loses their voices, never needs any kind of surgery and never has drug or alcohol problems.

Cheers to The Simpsons for maintaining longevity and quality and for bringing the laughs all these years. Looking forward to seeing what’s next!