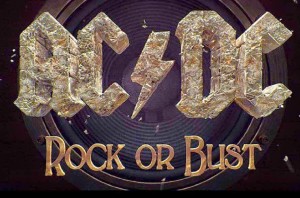 AC/DC is one of my favorite bands of all time. And they’ve been through a few things.

Formed in 1973 by brothers Malcolm and Angus Young, AC/DC endured several lineup changes before releasing their first album, High Voltage, in 1975. By 1977 more members were replaced for the album Powerage and then, a few months after recording Highway to Hell, lead singer and co-songwriter Bon Scott died in 1980 due to pulmonary aspiration of vomit as a result of extreme alcohol consumption. Although the band initially considered disbanding, they somehow found a lead singer that sounded just like Scott. Brian Johnson’s first effort as lead singer of AC/DC was Back in Black which became their best-selling album ever and the sixth highest-selling album in the US with 22 million units sold. Since the addition of Johnson, the band has released nine albums with the most recent, Rock or Bust, slated for release on December 2, 2014.

Although AC/DC has endured significant tragedy, the last few months may have been their toughest yet. Founding member Malcolm succumbed to dementia and is in a full-time care facility in Australia. He did not contribute to Rock or Bust and has retired from music. Most recently, drummer Paul Rudd was arrested and accused of murder for hire. That charge was dropped for lack of evidence but he is still accused of threatening to kill and of possession of methamphetamine and cannabis.

But even with two key members unable to perform, the AC/DC show will go on as the band plans to embark on their 2015 tour as scheduled. Stevie Young, Malcolm and Angus’ nephew, will fill in for Malcolm but the drummer spot is still up in the air. The silver lining to all this misfortune is that another generation of rock fans will have the chance to see one of the most legendary bands in rock and roll. I’m grateful I had the opportunity to see them live in 2008 – what an amazing show from a band that continues to define rock and roll. Since its inception, AC/DC had sold more than 200 million records worldwide, including 71.5 million albums in the United States alone, making them the 10th best-selling band in the United States and one of the world’s best-selling bands of all time. And if their new song “Play Ball” is any indication of Rock or Bust’s awesomeness we are in for another epic AC/DC album.