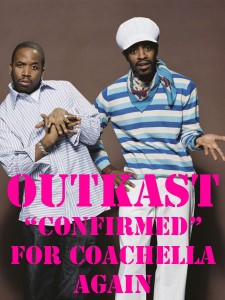 On November 19, 2013 I wrote about the possibility of an Outkast reunion and the huge impact that would make on the music business and fans. Well guess what? Andre 3000 and Big Boi are joining forces again as OutKast and are slated to headline Coachella 2014.

The festival made the big announcement on Twitter and said: “Share it like a polaroid picture.” No problem! In other Coachella news, Muse will headline the Saturday night slot and Arcade Fire will close out both weekends.

And that’s not all. Based on this year’s lineup, this festival clearly has taken the reins as THE festival of the summer: Queens of the Stone Age, Pharrell Williams, the Replacements, Beck, Motorhead, Lorde and Nas, among many others. Those are some big names and they aren’t headliners. What the hell is going on? When did Coachella become the biggest summer festival in America? Because it features a cross section of musical acts that include old school favorites, popular new additions, DJs and sometimes holograms of deceased rappers.

Started in 1999, Coachella Valley Music and Arts Festival attracted approximately 10,000 people who watched performances by Beck, The Chemical Brothers, Tool, Morrissey and Rage Against the Machine. Due to financial issues the event did not take place in 2000 but picked up again in 2001 thanks to Perry Farrell and Jane’s Addiction. Featuring huge headliners Red Hot Chili Peppers and the Beastie Boys, 2003 was a big year for Coachella and each subsequent year has aimed to please. Headliners for 2004 were Radiohead, The Cure and The Flaming Lips, 2005 brought Coldplay, Weezer and MIA and 2006 boasted Tool, Madonna and Gnarls Barkley. Paul McCartney performed in 2009, Jay-Z in 2010, Kings of Leon and Kanye West in 2011 and the list goes on and on.

In 2012, during Dr. Dre and Snoop Dogg’s performance, a projection of late rapper Tupac Shakur came up from under the stage and began performing “Hail Mary” and “2 of Amerikaz Most Wanted.” Mind blown. We were promised something big and we got it. I remember watching the Tupac resurrection hologram event and it was amazing.

Now in its 16th year, Coachella has become a big fucking deal. Every April over 200,000 people travel to the desert that is Palm Springs, California and love every minute of it. Although I understand the logic behind music festivals – lots of acts under one “roof” so you’re totally getting your money’s worth even though you’re paying $25 for a bottle of water in the scorching heat – I’ve never been a fan.

I think every music fest is trying to capitalize on the original Woodstock but I’m not sure if it actually works. Sometimes festival-goers are forced to drive home due to a no-camping rule and if they are allowed to camp there are never enough bathrooms or trashcans and prices for everything are always exorbitant. That being said, if a festival is the only venue to see Outkast then it may be worth it. And if pain in the ass celebrities/musicians like Madonna are willing to be part of the bill and the powers that be will go so far as to bring back Tupac who am I to criticize? Hopefully Coachella isn’t the only opportunity for Outkast fans to see Andre and Big Boi live – I think everyone in the music community misses them.