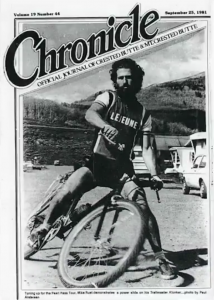 When I was invited to see The Rider & The Wolf, I was told it was a film about a Mountain Bike Hall of Fame cyclist who disappeared out of nowhere. Although I don’t mountain bike, I was interested because I always appreciate real stories about real people. Especially when they are from Colorado. Before seeing the film, I did some research and found out that since the film’s release in 2015, there have been some updates to the story. But let’s back up for a minute.

The rider in the movie is Mike “The Bike” Rust, a charismatic guy from a large Irish family who helped pioneer the sport of mountain biking in America by bringing excitement and technical innovations to  the Colorado mountain towns of Crested Butte and Salida. Because both those towns are close to where I live in the Vail Valley, I was even more fascinated by who this person was and what happened to him.

With a creepy recording of an unidentified woman’s voice in the background (who we later find out is the voice of a psychic), the film starts by showing a vacant, oddly constructed house in the middle of nowhere and an unidentified man peeling out on a dirt bike. (We are later told that the house belongs to Rust and the man is meant to be a reenactment of what police think happened to Rust on the day he disappeared). Next, the movie quickly shifts to the late 1970s and begins to explain the history of both mountain biking and Rust – someone who everyone interviewed in the film describes as a person who did things his own way, was innovative, and who was a tremendous athlete. According to the people closest to him, Rust was always looking for ways to improve bicycles and showed small-town locals what bikes were really capable of doing.

Throughout the The Rider & The Wolf, we learn about all the ways Rust figured out how to tweak bikes to make them more mountain-friendly and how his first rendering of the mountain bike brought him to Crested Butte in 1980. That same year he completed his first Pearl Pass Tour like a beast – in fact the footage shows him dusting everyone on the trail without breaking a sweat. There is no question this guy was hardcore – he carried his own camping gear on his bike everywhere he went and was clearly instrumental in both the mechanical and all-around awareness aspects of the sport. In 1981 Rust was on the cover of the Crested Butte Chronicle, in 1985 he and business partner Don McClung started Colorado Cyclery and built their first elevated chain stay bike called the “Shorty,” and in 1986 they moved the company to Salida, Colorado. Always tinkering and improving his beloved machines, Rust built his first “Ordinary” (aka penny-farthing or high-wheeler) bicycle and then participated in the Ordinary World’s Road Championships Museum & Parade. In 1989 he won the Colorado State Games Mountain Bike Race and then, along with his brothers, rode the Colorado “Ride the Rockies” tour on high-wheeler bicycles. In 1991 he was inducted into the Mountain Bike Hall of Fame.

Rust was on the fast track to becoming the face of Colorado mountain biking until all of the sudden he decided he wanted to live on his own and off the grid. He sold the shop and moved to middle of nowhere Saguache County in southern Colorado – a place is known as the gateway to the rural San Luis Valley. Why? Because building permits didn’t exist there.

And this is where the movie gets weird. Viewers find out that in 2009 Rust came home from the grocery store (that was something like 40 miles away) to his home being broken into and his gun stolen. He made one phone call to his “sort of” girlfriend and that was the last anyone heard from him. According to police reports, Rust jumped on his dirt bike to chase after the people he thought robbed him and they killed him. When his family didn’t hear from him they went to his house and saw the groceries and that the house looked fairly normal. But they never saw Rust again.

At this point we find out that the creepy voice is a psychic that the family hired to help find Rust –an odd factoid that is never addressed again. Then we see images of wolves which I assume is meant to signify the fact that Rust acted and lived as a “lone wolf” but, other than the title of the film, the comparison is never addressed. We also learn that, for some reason, there was hardly any news coverage of the incident and it’s still not clear why outdoor and cycling magazines failed to cover Rust’s story. Also, no one in Saguache County seemed to know anything – or at least no one was talking.

Fortunately for the Rust family, a film company called Grit & Thistle decided to create a film about the disappearance because, six years later, someone finally came forward with some information. In October 2015, Michael Gonzales, son of suspect Charles Moises Gonzales, contacted Saguache County police to say he thought his father was involved in Rust’s disappearance when a hole he and his father dug on his grandfather’s property was suddenly filled in. As a result of Michael’s phone call, in January 2016, search and excavation found and identified Rust’s remains. In June 2016 (two months before the screening of the film I saw in Minturn), the Colorado Bureau of Investigation issued an arrest warrant for suspect Charles who is currently serving time in Cañon City for unrelated charges. If found guilty of Rust’s murder, he will be charged with first-degree murder, first-degree burglary, tampering with evidence and abuse of a corpse.

Although the eerie story of Rust’s disappearance is definitely worth telling, there were a few holes in the film. As mentioned before, the psychic and the wolf are two aspects that needed to be furthered explored. Also, although the idea of anyone disappearing is frightening, the fact that Rust chased after people unarmed and in the middle of nowhere was a stupid move made by a seemingly extremely intelligent person. It’s never made clear why he reacted the way he did or why his neighbors refused to talk. Were they scared of the people who killed Rust? If so, why would they want those people walking around their area?

Following the screening, filmmaker Nathan Ward and Rust’s brother Carl were there to answer questions which was definitely helpful but also made me wonder how the film would hold up without those two there to make clarifications. Either way, the film clearly brought Rust’s story back to the people of Colorado and, according to Ward and Carl, pretrial began last month. All these years later progress is being made. Hopefully the mystery is solved soon and Rust’s family can finally get some much-deserved closure and peace.