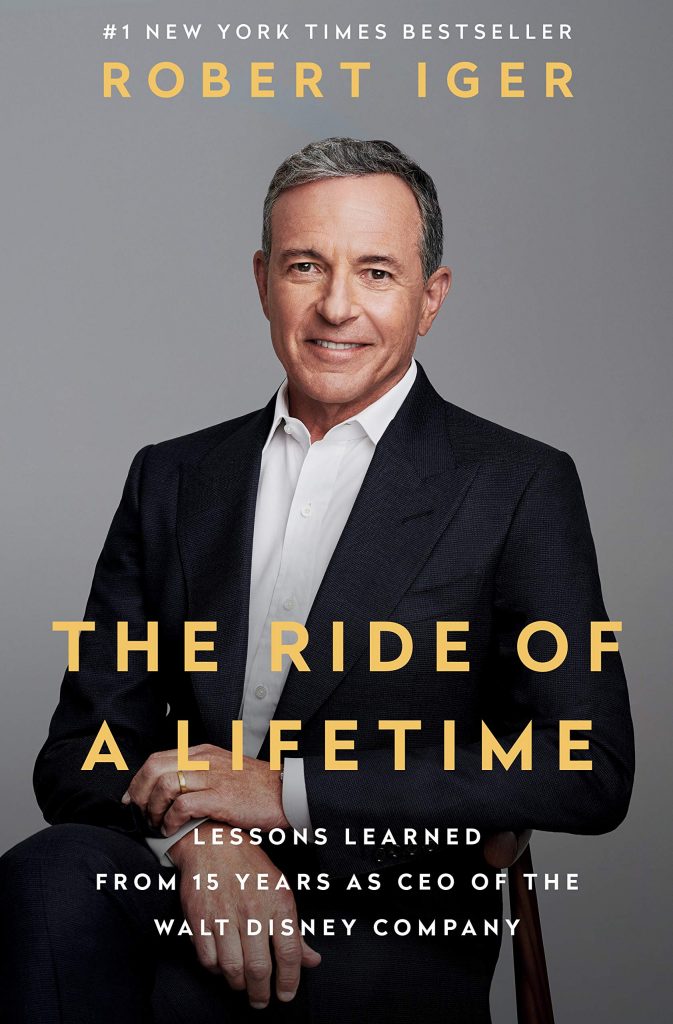 In sentence one of chapter one, Robert Iger makes it clear that his book is not a memoir – but in a lot of ways it is because it chronicles his rise from daytime soap opera crew member to CEO of Disney. He also talks about his family, friends, and relationships. We’ll call it a memoir that is also a book about how to succeed in business. While Iger doesn’t really break new ground in his book of lessons, he is a thoughtful writer who has made big moves throughout his career. Moves that have changed the course of technology, media, entertainment, and the creative culture that makes up so much of what we know and use today.

Universal ideas he mentions in the prologue are a common thread throughout the book: fostering risk-taking and creativity, building a culture of trust, fueling curiosity in oneself and inspiring that in others, embracing change, and maintaining integrity and honesty. Nothing revolutionary but all extremely important. He also lists ten principles that are “necessary to true leadership” including optimism, courage, focus, decisiveness, curiosity, fairness, thoughtfulness, authenticity, the Relentless Pursuit of Perfection, and integrity. Again, not reinventing the wheel by any means, but the book does demonstrate how he put all of those principles into action.

In terms of his resume, Iger is absolutely a voice to be reckoned with as he spearheaded Disney’s acquisitions of Pixar, Marvel, Lucasfilm, and 21st Century Fox – deals worth billions and billions of dollars. Another common thread is the importance of telling great stories and how, in order to do so, exceptional talent is necessary. Amen. Iger also talks about hiring smart people and letting them do their job – something my mother always did and something my former newspaper publisher always implemented. As a content writer, I appreciate his reiteration of the power of storytelling. I also found it fascinating, and a breath of fresh air, that he strongly believes that Disney’s success hinges on the characters created and the stories told. If the characters aren’t memorable, the stories won’t be either, and no money is made. Again, amen.

Other pearls of wisdom I appreciate are that there is the balance between making a decision in a timely manner but still doing your due diligence. Additionally, there is a difference between empathizing with someone and giving them what they want because you feel bad. I also like that he made up a term – “Management by press release” – which means that saying something with conviction to the outside world tends to powerfully resonate within the company. Because I loathe buzzwords and buzz terms, I love how Iger brilliantly decimates this one: ‘“Change agent’ is a meaningless phrase and a corporate cliché.” Yes!

“Something will always come up. At its simplest, this book is about being guided by a set of principles that help nurture the good and manage the bad.”

This one is especially pertinent in our current climate: “People are not motivated or energized by pessimists.”

“True innovation occurs only when people have courage.”

“Be in the business of making things great.”

“Innovate or die, and there’s no innovation if you operate out of fear of the new or untested.”

“It’s a delicate thing, finding the balance between demanding that your people perform and not instilling a fear of failure in them.”

“Anything that reminds you that you’re not the center of the universe is a good thing.”

“Long shots aren’t usually as long as they seem.”

“A company’s integrity depends on the integrity of its people.”

It was nice to read current content as it’s something I don’t always get to do in terms of books. Also, I’m pleased to report that most of the quotes I pulled prior to reading the appendix called “Lessons To Lead By” are reiterated in that section. Clearly, I learned something.