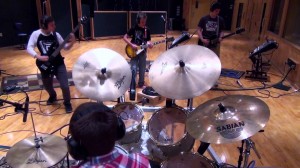 Did you know that there is a tiny town in Ohio called Maineville that houses some of the best young musicians I’ve heard in a long time? They are all schooled at Maineville Music Academy which offers private lessons in piano, guitar, bass, percussion and brass which are apparently taught by the most accomplished educators in the area.

What sets this music school apart? They want their students to learn the good stuff which includes songs by a wide range of artists such as Jimi Hendrix, Chuck Berry, Led Zeppelin, Pat Benatar, Jewel, Guns N Roses, Aerosmith, Tom Petty, Black Sabbath, Regina Spektor, Elton John, Alanis Morissette and Johnny Cash, among many others. The list literally goes on and on and it’s awesome.

Although most of the student recordings on the school’s site are very impressive, the most professional recording is a music video that has already earned over three million views on YouTube. These kids – who are probably between 11 and 14 years-old – absolutely crush “46 and 2” by Tool. There are three boys on guitar, one girl on piano, three more boys on percussion and another girl handling the singing. To say they did Tool proud is an understatement.

If you’re thinking that the school must only be for the wealthy think again. The cost of each 30-minute lesson is $20 to $22.50. Not a bad deal if you ask me.

So why aren’t more people talking about this school and why have they not been invited to perform somewhere important? I’m assuming that with over three million YouTube views that could change very quickly.