Call me old-fashioned but I still love handwritten notes. There’s something about a person’s handwriting that provides a window into the sender. But I also understand the world we live in and appreciate typed notes too. Notes of any kind actually. Although 2021 doesn’t necessarily lend itself to writing notes – especially when typing a text or email is so much more efficient – there are people who still do it. Most recently, I hand-wrote a thank you note to every person who took the time to choose and purchase a gift for Fleet’s second birthday and it was an enormous pain in the ass. But I still did it because that’s how my mother raised me.

That being said, I get why people don’t do it. It’s time-consuming and not everyone wants to spend money on stationary and stamps and then find a mailbox. Totally get it. And that’s why I value typed notes as well. In the last month I’ve purchased two items for Fleet that came with notes – see photos – and I found both notes interesting for different reasons. The first one came with the Wellchild magnetic drawing board (similar to an Etch A Sketch) I ordered from Amazon. The original note was handwritten by Janice but it’s now been photocopied for the masses. It says thank you, talks about much she appreciates the business, and that she is a mother of twins. Janice goes on to say that “nothing is perfect, so if you receive a defective item…please email me first on Amazon.” I love this because, in a very nice way, she’s asking the customer to contact her directly rather than posting a negative review. 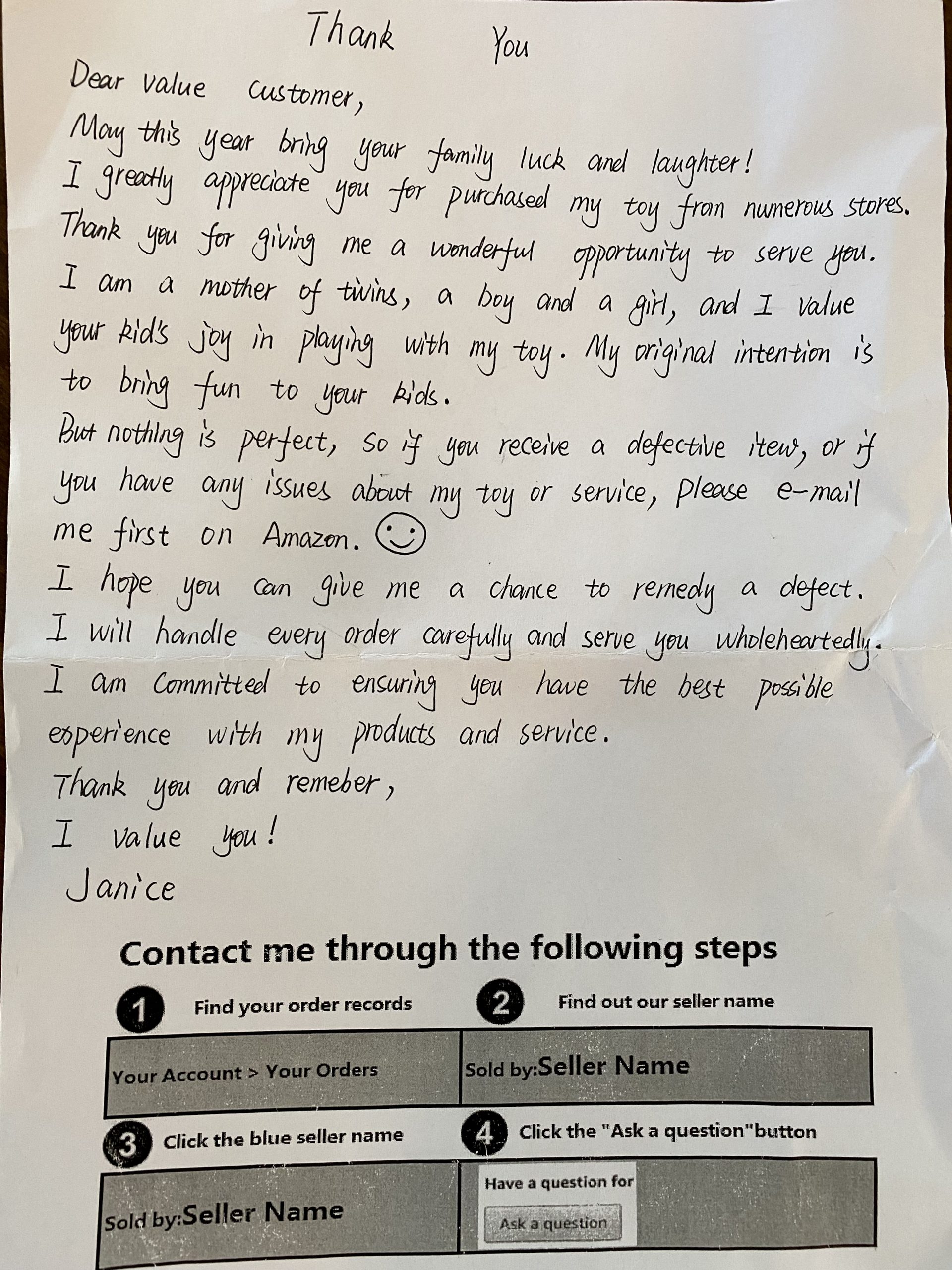 And that brings me to another point: As a journalist, I loathe websites like Yelp that allow ANYONE with a smartphone or computer to review businesses and products without any restrictions. It blows my mind that people can just fire off their opinions without providing context and that other customers take those comments into account. They could be drunk, angry, or just an asshole trying to stir up problems and yet they can just post their reviews without any regulation. Before social media, food critics and music journalists got paid a lot of money to critique restaurants and concerts because they were educated, professional writers with enough background and credibility to provide fair and substantial reviews. Now, literally anyone can write whatever they want and I find that absurd and unfair. I especially feel for the business owners out there who have to do damage control when inaccurate reviews are posted. Such a waste of valuable time.

But back to the second letter. I bought a box of Magna-Tiles for Fleet from a local children’s store and when I opened the box there was a typed letter from the creators. Of course I love family businesses so I was excited to see that Rudy and his wife Noriko founded the company with their four kids in 1997. He talks about how word-of-mouth helped their business succeed, how their children helped load boxes in the early days, and proudly mentions that their son now helps run the company. He concludes by saying: “After more than 20 years in business and millions of Mega-Tiles sold, we are still proudly a small and family-owned organization” and then thanks the recipient for buying their product. Even though this note is typed, it’s thoughtful, well-written, and includes a sweet photo of Rudy and Noriko. That’s the good stuff I’m talking about. Details and words matter and that note is a great example of taking the time to care about both. 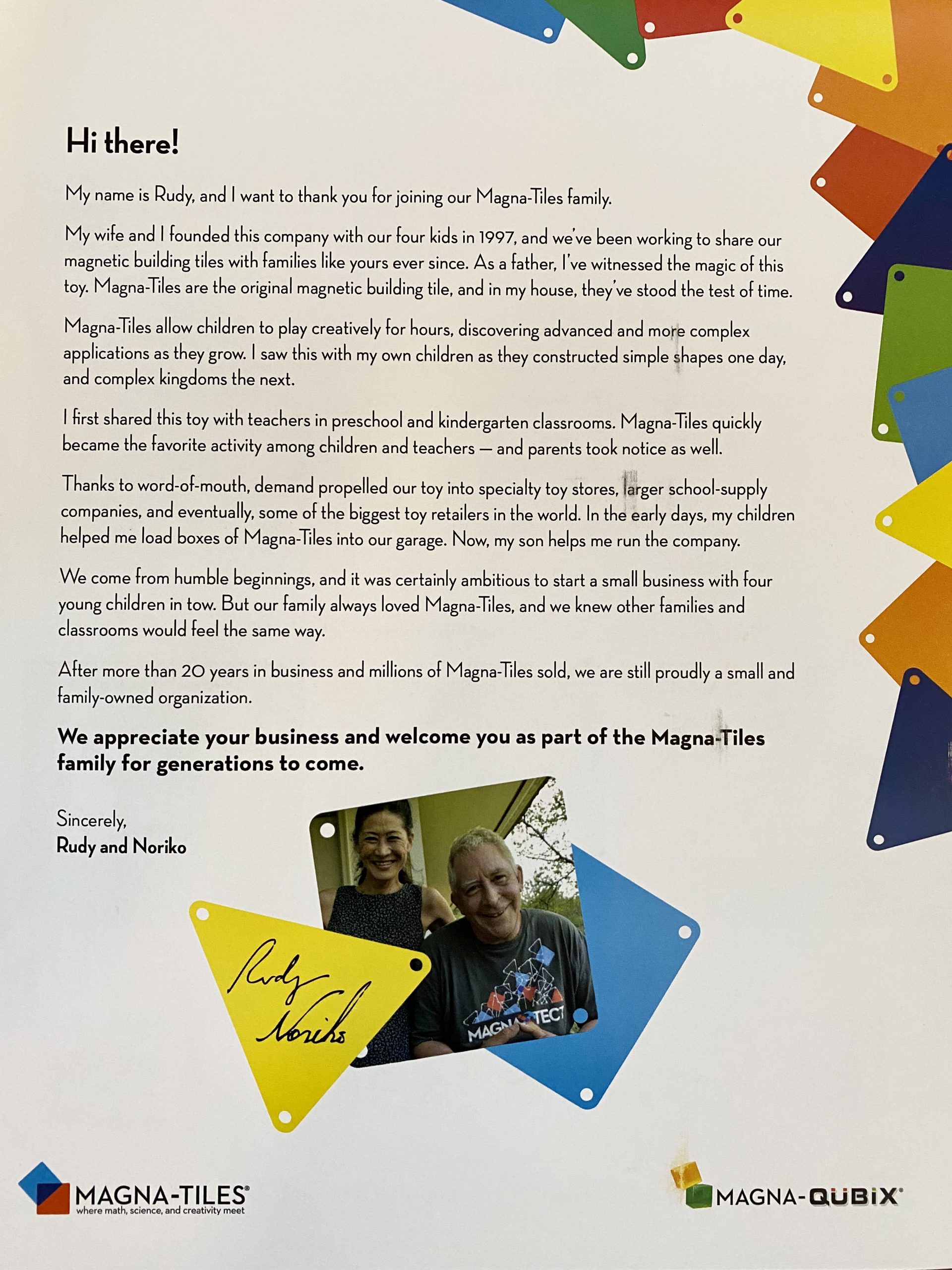 I’ve received many packages from Amazon over the years, but I don’t remember getting these types of notes so I’m wondering if it’s a new thing. Or maybe the notes are mostly sent by people in the children’s apparel and toy business. I wonder how long Janice and Rudy and Noriko have been including notes in the boxes of their respective products and what prompted them to do so. Maybe they felt inclined to add a personal touch or maybe they were tired of people electronically shooting off their mouths. Either way, I appreciated both notes enough to write about them. Also, Fleet is enjoying both products which is what matters most.