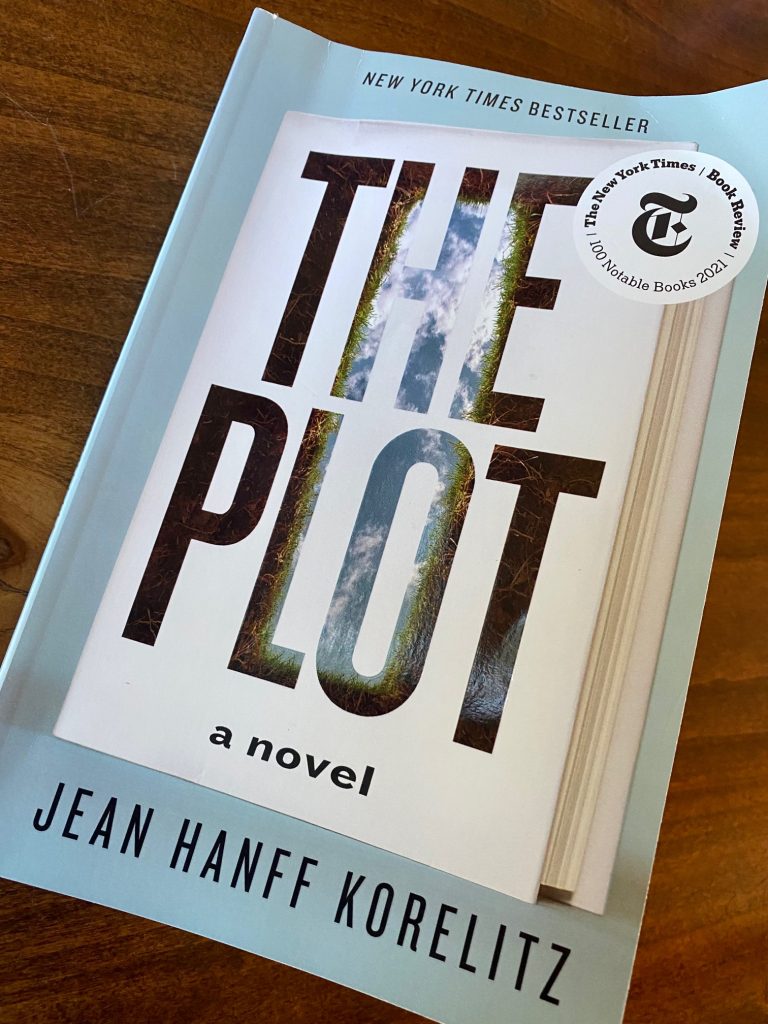 For the first time in a long time, I wasn’t overly impressed with a New York Times bestseller. Lately I’ve been reading books about writers, but The Plot wasn’t my favorite – mostly because by page 50 I was exhausted by repeatedly reading about the main character’s self-loathing. Not everything and everyone has to be puppies and rainbows but it was enough already. I got the idea – author Jake Bonner is in a writing slump and, instead of writing his next great novel, he is teaching a low rent MFA program at an unimpressive school. All of that could have been said in a chapter or two – but instead it goes on for six chapters.

Finally, on page 136, the plot of The Plot picks up. On page 188, when Jake goes into detective mode, the book becomes a story that is hard to put down. Finally. The premise is that Jake’s arrogant student Evan waltzes into the MFA program boasting that he has an award-winning idea for a novel and then later Jake finds out that Evan has suddenly passed away. So, of course, Jake steals his deceased student’s idea and becomes a huge success. That is until he starts receiving messages calling him out for being a thief. Once that happens, the themes become heavy – including the overuse of these two phrases:

“Every single person had a unique voice and a story nobody else could tell.”

“I’m not even sure writing can even be taught.”

First of all, of course everyone has a unique voice and second, of course writing can be taught. That doesn’t mean everyone is a good writer, but people can learn why certain sentence structures work better than others, how to use fewer words to get their point across, etc. Some people happen to be better at writing than others – which is why I have a job – but that doesn’t mean it can’t be taught. Writing is a skill and, as an educator, that whole thought process is extremely annoying. Not everyone can be a writer, but they can learn about writing.

Throughout The Plot, characters discuss the twist in Jake’s book – which we learn is called Crib (that title is overflowing with double meanings) – and it becomes clear that a plot twist is coming in The Plot as well. Whew! The story within a story mirror one another and that speaks to author Jean Hanff Korelitz’s ability to write. Switching back and forth between her own book and the story within the story is a tough and clever trick to pull off, which the author handles nicely, but from a reading standpoint, it does take some time to get into the groove of shifting between narratives. Korelitz also knows how to write dialogue which has always been difficult for me so that’s another literary feat worth mentioning.

Going back to themes – although I think the question of what constitutes stealing (versus borrowing) is interesting, Korelitz answers her own question: It depends on the story, the situation, the characters, etc. People write “novels” about true events all the time which allows them to take whatever liberties they want. For example, Taylor Jenkins Reid’s Daisy Jones & The Six screams Fleetwood Mac’s Behind the Music but Reid is careful to make it her own story. And it’s one of my favorites.

All that being said, Part Four of the book is the definition of a page-turner. I had to know what happened next and stayed up way past my bedtime to find out. It was that good. But, as I said before, it takes entirely too long to get there. I do not make a habit of giving up on books but I almost did with this one. I’m glad I harnessed the patience to get through Part One, Part Two, and the first half of Part Three because the twist is something else. (Side note: Part Three starts on page 69 and goes all the way until page 240).

“What I don’t understand is why you’re holding out for such extreme benchmarks of validation.”

“The combination of ignorance and mean-spiritedness – that was special”

“Writers who were assholes to other writers were asking for it: social media had seen to that.”

“She lifted her glass, half in salute, half as a signal to the bartender.”