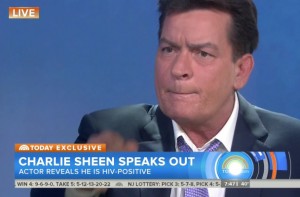 When I heard that Charlie Sheen disclosed his HIV diagnosis during an interview with Matt Lauer on The Today Show I was horrified. Not only because hearing about a death sentence is frightening but also because he has decided to write a memoir about his never-ending streak of crazy behavior. Although people clearly love celebrity gossip to an obsessive degree and celebrities enjoy capitalizing on the public’s obsession, I find Sheen’s plan to write about his struggle with HIV extremely sad and disheartening. While the “plan” is for Sheen to discuss his film and TV career, what people really want to know is about his drinking, drugging, parade of sexual partners, ex-wives, salacious YouTube videos, tumultuous relationships and now, of course, his diagnosis.

During his interview with Lauer, Sheen revealed that he has been HIV-positive for four years which means that through all of his “winning” and “tiger blood” bullshit he’s been hiding this horrible secret. He also told Lauer that some of the various prostitutes he’s been having sex with used the knowledge of the diagnosis to blackmail him. Apparently he’s paid at least $10 million over the last four years to keep his secret from the public and who knows who else. Although both Lauer and Sheen handled the interview with grace, Sheen looked a bit sedated and had his doctor there to speak for him about all things medical. That being said, Sheen seemed to be speaking honestly, explicitly stated that he takes four pills a day for his condition, and no longer takes drugs.

Even though the actor says his inexplicable behavior – especially in 2011 when he wrote a scathing open letter to Two and a Half Men creator Chuck Lorre, announced that he “cured his alcoholism with the awesome power that is his mind,” and solidified his craziness via his infamous “winning” live stream – was a reaction to finding out that he was HIV-positive, I find it shocking that he has gotten away with this madness for so long. I feel terrible for his ex-wives and children who are tied to him for life, his father and brother who have put him in multiple hospitals and rehab facilities, and his co-workers (i.e. Ashton Kutcher) who have been threatened repeatedly for no discernable reason.

Fortunately (and hopefully), despite his continued sexual activity, Sheen claims he used protection and informed all of his partners of his diagnosis. He told Lauer it was “impossible” that he transmitted the disease to others, and that the two partners he had unprotected sex with were aware of his diagnosis and were under the care of his physician. One can only hope that all of that is accurate.

While Sheen has clearly become tough to root for over the last few years, I am sad for him. He started out as an exciting, charismatic actor whose rebellious attitude was fun to watch but then became so erratic that he was more of a cartoon character than an actual human. Hopefully Sheen chose to divulge his diagnosis to gain some peace rather than to gain more headlines (and ultimately a book) but only he knows for sure.