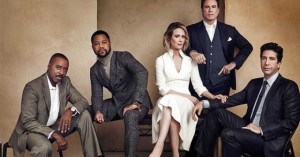 After weeks of promotion, a new FX series debuted on February 2, 2016 that focuses on the murder trial of O.J. Simpson. While this trial, famous for ill-fitting gloves, white Ford Broncos, and what seemed like endless television coverage, was clearly a significant part of American history and pop culture, I’m not sure why this show is happening 22 years after the opening statements began.

Taking place from November 1994 (the jury’s swearing-in) to October 1995 (the verdict), the O.J. Simpson saga has been described as the most publicized criminal trial in American history because it was literally on televsion for eight months. Who knows why Judge Lance Ito allowed cameras in the courtroom but he did and, as a result, the trial paved the way for reality TV and and the 24-hour news cycle we are accustomed to today. Known as the “trial of the century,” the People of the State of California v. Orenthal James Simpson captivated audiences across the country as they watched Simpon’s defense team work their magic. Comprised of Robert Shapiro, Johnnie Cochran, and Robert Kardashian, among many others, the trial took on a life of its own as a result of Simpson’s then-celebrity status.

I’m not sure why the powers that be at FX felt the need to revisit the case so many years later – maybe because some of the issues are still relevant today. Clearly there are a myriad of racial, political, media, and subsequently pop culture parts to it and so far the show, like the trial, is pretty polarizing. Based on Jeffrey Toobin’s book, The Run of His Life: The People v. O. J. Simpson, the show is a limited series that highlights the trial and the legal teams battling to convict or acquit the embattled Simpson. While anyone who was at least my age in 1994 remembers watching the craziness on live television, what the public didn’t see was all the behind the scenes occurrences i.e. whatever was going on inside the Bronco while Simpson was wreaking havoc on the 405 Freeway in Los Angeles. Even though the public knows the outcome of the trial, we obviously didn’t see what was happening inside the D.A.’s office between hardass Marcia Clark and her peers, didn’t hear the conversations between Shapiro, Kardashian and their friend “Juice” in jail, or listen to Simpson’s team strategy sessions.

Three episodes in, The People v. O.J. Simpson: American Crime Story is comprised of chaotic drama, decent acting, and too much Kardashian. The drama consists of behind-the-scenes perspectives on both sides of the case, as well as home and work life scenarios of the big players including John Travolta (Shapiro) wearing a ton of makeup, a sometimes unhinged Simpson played by Cuba Gooding Jr., Sarah Paulson chain-smoking and chasing after her kids as Marcia Clark, a very 90s-dressed David Schwimmer (Kardashian), and Courtney B. Vance who I doubled-taked because he is a replica of Cochran. While the acting is pretty good, there is too much focus on the Kardashian kids and Kris. Since the kids were young and hadn’t become famous for being famous yes, they were inconsequential in 1994 and 1995 so I’m not sure why scenes that show Selma Blair as Kris at Nicole’s funeral, the kids in their room watching their dad on the news, and the family getting a prime table at a restaurant because Robert is recognized from the trial are necessary.

Overall, The People v. O.J. Simpson: American Crime Story depicts the impact the media had on this case (Simpson was on the cover of Newsweek and TIME, a story was published by The New Yorker, 911 tapes of Nicole and O.J. were released, etc.), the crazy people who were part of it (i.e. Kato Kaelin), the huge part race played in the story from start to finish, and how the 1992 L.A. Riots contributed to the public’s opinion and the final verdict. While the audience knows how this story ends and the case is over two decades old, the show is captivating. Maybe it’s because we are seeing multiple perspectives or maybe because it’s still shocking that all if this actually took place. It will be interesting to see how the rest of the series plays out.

On another note, the second season of American Crime Story will be about Hurricane Katrina and its aftermath. Apparently the plan is “to follow a group of six to eight people in an attempt to examine all sides of the tragedy, from the Superdome in New Orleans to the hospital to those who were put on buses and dropped off with babies who had to wear trash bags, for multiple days.” More drama about a tragedy so insane that it’s hard to believe it really happened. Production for the second season is expected to begin in fall 2016.