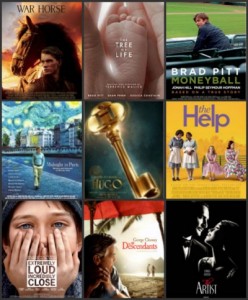 Is it me or does this year’s Academy Awards show seem like an afterthought compared to the Grammys? Maybe it’s because I follow music more than I follow films but I feel like the most talked about aspect of Hollywood’s biggest night of the year is that Billy Crystal is back!

Now don’t get me wrong – I thought Moneyball and The Help were amazing movies. Two of the best I’ve seen in a while. But that’s it! Those are the only two I’ve seen out of the nine nominees (why aren’t there 10?) for Best Picture.

I heard The Descendants was good but very sad and that War Horse was beautiful and well done but that’s pretty much it. So why is this year so uneventful for the movie business? It is because one of the most talked about movies of the year was a comedy starring all girls? Bridesmaids was funny but I didn’t think it was that great – The Hangover was way better. Also, there was discussion about the movie being nominated for Best Picture but alas it didn’t happen. Wise move.

In addition to Crystal, people are talking about George Clooney vs. Brad Pitt for Best Actor. While Clooney has won an Oscar for Best Supporting Actor in 2005 for Syriana, Pitt has been nominated three times (including this year) but has never won.

Hopefully the show will be entertaining and Crystal brings his magic. I also hope that Moneyball and The Help take home as many prizes as possible. In the meantime I’m still reeling from the Grammys and the fact that Whitney Houston is gone. And unfortunately listening to her old tracks isn’t helping.