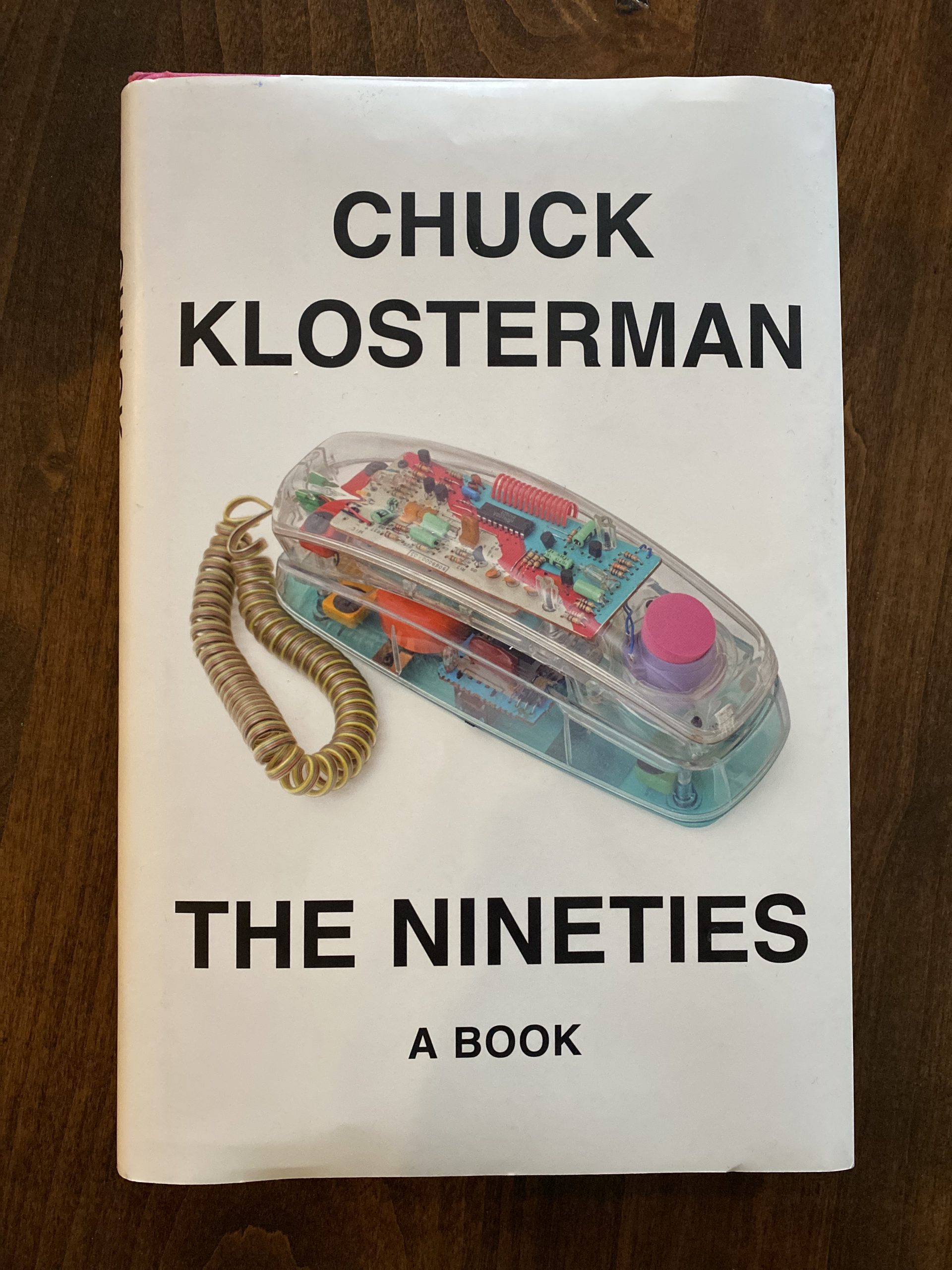 In 2003, Chuck Klosterman published a book called Sex, Drugs, and Cocoa Puffs about pop culture – in which he examined music, television, and movies – and it was excellent. It was the first time I had read a book that analyzed pop culture and, a few pages in, I remember thinking that Klosterman was an extremely educated author who knew his audience and therefore knew  exactly when and how to be very clever. In 2005, he published Killing Yourself To Live in which he chronicled his journey to sites where rock stars died all over the country.

When I was a student at the University of Colorado in Boulder, Klosterman did a book signing on Pearl Street and signed my copy of Killing Yourself To Live (see photo). It was so many years ago, but I still remember how approachable and kind he was which made a significant impression on me as a future hopeful professional writer. Also, he gave me his email address which was an AOL address! HA! Today I visited his website and there is definitely no AOL address and definitely no direct form of contact. If you want Klosterman, you can email his publicist or agent. Fair enough. He’s a bestselling author now! 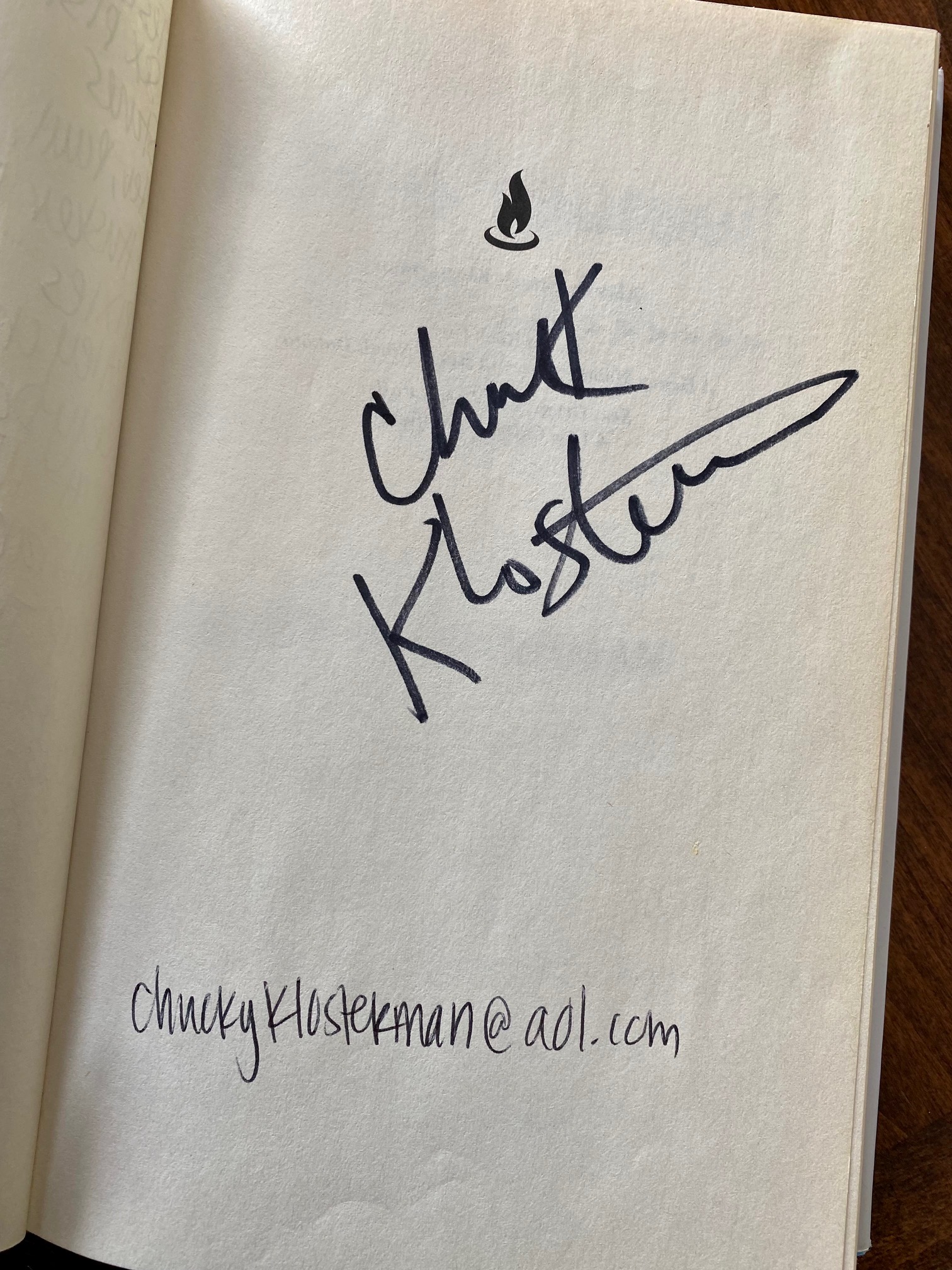 Since those two books, I’ve read IV (2006) and Eating The Dinosaur (2009). Now he’s written a book called The Nineties which chronicles a decade that has experienced a resurgence over the last few years. Examples include: bringing back the original Real World cast, people (including me) wearing combat boots with everything, putting 90210 back in the spotlight, and the release of the Jonah Hill directed skateboard movie called Mid 90s, just to name a few. As an 80s kid who grew up in the 90s, I have special place in my heart for the fashion, movies, and of course, the music from that era. So when I heard that Klosterman’s latest book was called The Nineties, there was no question that I was going read it.

As per usual, Klosterman touches on music, movies, sports, and television, but this time he also heavily discusses technology and politics. Always on top of research, he is and always has been all about the extensive footnotes. Some of my favorite references are Reality Bites (where Klosterman talks about Ethan Hawke’s character being a spirit animal), describing Nirvana’s Nevermind as “the ideal mainstream version of counterculture ideology,” and recalling 2 Live Crew’s album As Nasty As They Wanna Be being banned from many South Florida record stores (Spec’s was not one of them because my mother has always believed in freedom of speech). He’s also not afraid to dig deep into cultural history as he educates the reader about how the word Ebonics (a blending of the words ebony and phonics and invented in the mid-70s) came about and the ways it affected language, concepts, and education.

He goes on to talk about the esoteric nature of Quentin Tarantino movies like True Romance (written by Tarantino, directed by Tony Scott), Natural Born Killers (written by Tarantino, rewritten and directed by Oliver Stone), Reservoir Dogs (Tarantino’s directorial debut), and, of course, Pulp Fiction. Klosterman also points out the pivotal nature of the year 1995 with the invention of Netscape Navigator, Craigslist, and Amazon. He then quotes a book written in 1995 by Nicholas Negroponte called Being Digital: “Like a force of nature, the digital age cannot be denied or stopped. It has four very powerful qualities that will result in its ultimate triumph: decentralizing, globalizing, harmonizing, and empowering.” Pretty insightful for 27 years ago.

Klosterman has an uncanny ability to describe the smallest things and make them seem bigger and more important. For example: “‘Achy Breaky Heart’ became the first country single in almost ten years to sell a million copies…It was musically and lyrically repetitive, with every chord change and verse laser-focused on catchiness and immediacy.” He also describes Garth Brooks’ “modernized version of honky-tonk” as “most musically reminiscent of George Strait, his live shows influenced by Kiss, and his songcraft inspired by Billy Joel.” Who even thinks of that?

Another interesting argument he makes is regarding the term “alternative” and how labeling entities using that terminology became “a viable way to sell an otherwise unsellable product, prompting a genuine motivation to find and produce content that was once considered too off-kilter to make real money.” Klosterman also points out that “the prefix ‘alt’ could now be applied to almost anything for an instant jolt of reconsideration.” An example he uses is how the movie Swingers (which I love) featured scenes with bar patrons dancing to swing music, and more specifically the band Big Bad Voodoo Daddy, brought the genre into the pop culture lexicon along with the Cherry Poppin’ Daddies and Brian Setzer. I loved that era.

On another note, I am fascinated by Klosterman’s statement about how differently certain viewpoints of events in the 90s would be treated in 2022. For example, the public would have had a lot more empathy for Monica Lewinsky and would have scrutinized Mike Tyson. Another example is Tiger Woods because, while his story is now “disenchanting and…a little heartbreaking,” in the 90s he seemed to be “the human representation of neutral perfect.” And, of course, an enormous difference between the 90s and now is social media: “No stories were viral. No celebrity was trending. The world was still big. The country was still vast. You could just be a little person, with your own little life and your own little thoughts. You didn’t have to have an opinion, and nobody cared if you did or not. You could be alone on purpose, even in a crowd.”

As I said earlier, while I appreciate Klosterman’s commitment to journalistic integrity and the abundance of research (14 pages of sources!), some of the footnotes get old. Clearly history is a big part of this book, but I don’t want to feel like I’m reading a textbook. I love that he seamlessly weaves music, sports, politics, television, and technology together, but he leans very heavy on politics which again feels almost too scholastic. I love analyzing pop culture but the details of Bill Clinton’s presidential campaign (other than him playing sax while wearing sunglasses on Arsenio) do not interest me. Lastly, I don’t want to give away the ending but let’s just say that the book ends as abruptly as the 90s did. 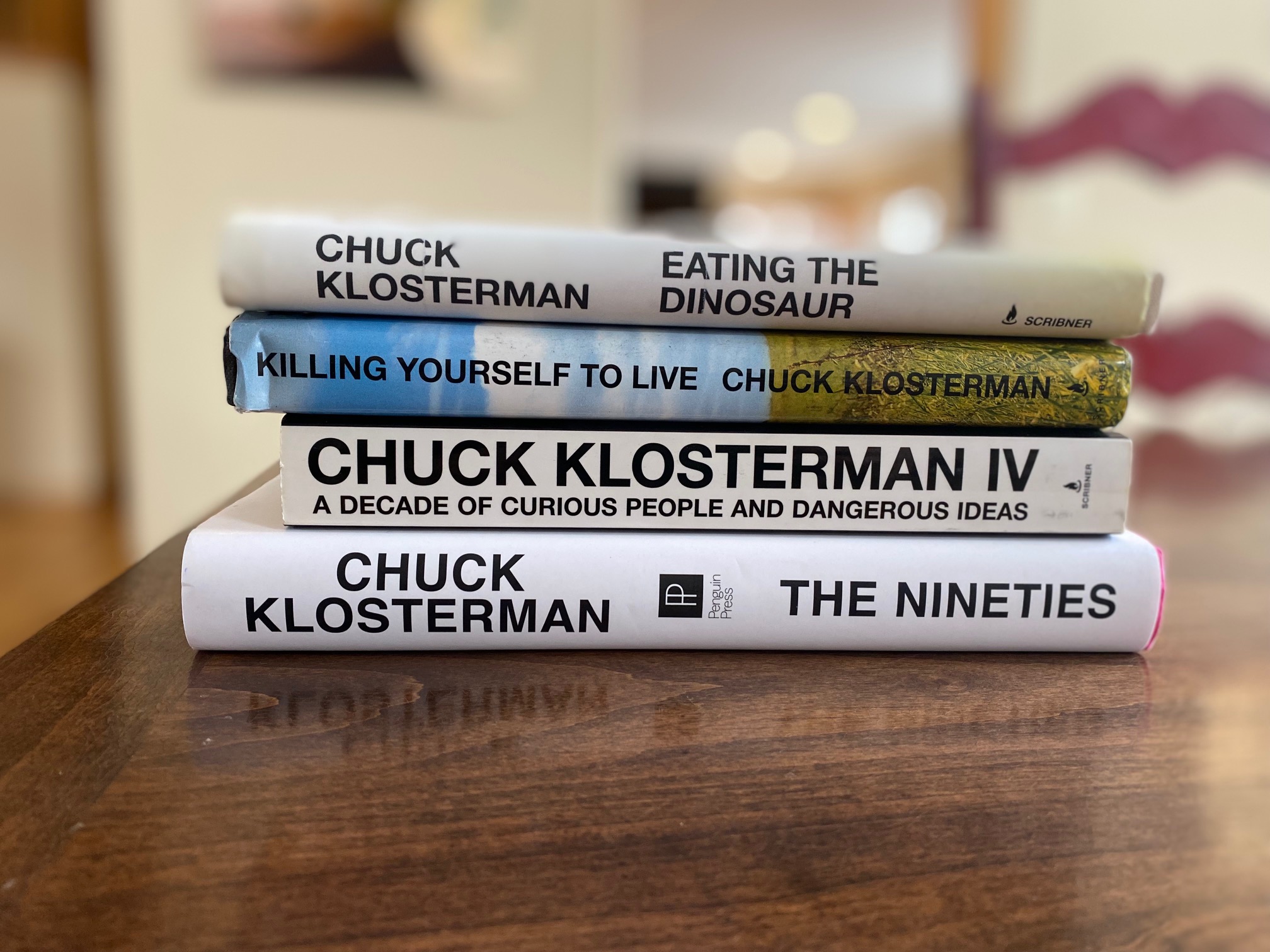 “There’s always a disconnect between the world we seem to remember and the world that actually was. What’s complicated about the 1990s is that central illusion is memory itself. The boilerplate portrait of the American nineties makes the whole era look like a low-risk grunge cartoon.” I laughed out loud at this one.

“It was perhaps the last period in American history when personal and political engagement was still viewed as optional.”

“It was the end of the twentieth century, but also the end to an age when we controlled technology more than it controlled us.” So true.

“An authentic jerk was preferable to a likable sellout.” I laughed out loud at this one too.

On Alanis Morissette and Liz Phair: “What they shared was the experience of being trapped by their own willingness to use language that was too visceral for audiences to move beyond.”

“Alanis was subliminally saying fuck on Top 40 radio every other hour for an entire summer.” Yes!

On Napster: “It made single songs more important than albums, which hadn’t been the case since the early sixties.” Additionally, “it changed how people viewed what music was, in a way that would never change back.”

On the internet: “It was possible, perhaps as late as 1995, to view the internet as only an extension of computer technology. By the end of the decade, the internet operated as its own form of mass media, with computers serving as the host.”

On Crystal Pepsi: “The human mind does not respond positively to familiar products that contradict expectations.”

On the Friends cast: “They were not products of their time; they were products within time.”

On The Matrix: The movie “confirmed that a major film could now be positioned anywhere, anytime. The commercial power of cinema was no longer dictated by the habits of society; those habits could be shaped.”

On the OKC bombing: “By constantly providing people with more and more conflicting data within an essentially static situation, it was possible for the audience to invent whatever narrative they desired.” Power of the media.

On the OJ Simpson trial: “The primordial impulse of what would eventually drive the mechanism of social media: the desire of uninformed people to be involved with the news, broadcasting, their support for a homicidal maniac not because they liked him, but because it was exhilarating to participate in an experience all of society was experiencing at once.” Can you imagine what the OJ Simpson trial would have looked like if social media existed at the time?

“People watch cable news as a form of entertainment, and they don’t want to learn anything that contradicts what they already believe.”

“So often, the formative experiences of historically notable people seem to glancingly intersect with the lives of other notable people.”

“Bill Clinton…recognized that television was a medium intimately understood by everyone who had never experienced life without it.” I assume this will be true of Fleet and smartphones.

Tupac joined Death Row Records in 1995 while serving time in a correctional facility.

1993’s Jurassic Park was, for several years, the highest-grossing film in movie history.

Garth Brooks’ first name is Troyal and the only year in the nineties he did not release an album was 1996.

Titanic earned $1.8 billion at the box office which means it is the highest-grossing movie ever made.

Oprah Winfrey was the first Black female billionaire in history.

Eminem released his first album in 1996 and within five years he became the most successful rap artist of all time.