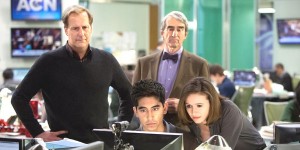 Although Aaron Sorkin’s HBO series received as much criticism as praise, The Newsroom was green lit for a second season which began on Sunday. What I liked about the first season of this show was that it was equal parts bite and banter with the usual Sorkin dialogue that gives characters lines that are educated and well-researched but doesn’t allow them to breathe in between sentences. But after watching the first episode of the second season via on-demand last night I found myself disconnected, not at all engrossed and (although I hate to admit it) a little bored.

The episode opens with Will in a deposition with lawyer Rebecca Halliday (Marcia Gay Harden), who apparently gets paid $1,500 an hour, discussing a major legal problem that News Night has incurred as a result of Will calling the Tea Party “the American Taliban.” Set 14 months ahead the show jumps right in which caught me a little bit off guard since it takes a few minutes to get to why they are being deposed and that we have jumped so far ahead. What is made clear from the beginning is that in addition to Harden having one of the most annoying voices in Hollywood (a shame since she’s a good actress) her character is going to be a perennial pain in the ass for the newsroom crew.

Within those first few minutes we also see that Maggie looks completely different as she is sporting a very short, reddish pixie cut and is dressed more Urban Outfitters than the J.Crew- wearing blonde we know. When Halliday mentions that Maggie looks entirely different than the Maggie in the photo she has in her hand Will quickly retorts, “If what happened to her happened to you…you’d sit in the middle of a room and cry forever.” Whoa – what the hell did happen? We also see Neal working on Occupy Wallstreet which introduces us to a new character that talks exactly like the News Night people. We’ll see if she garners any interest in upcoming episodes because she didn’t do much for me in this one.

The only redeeming aspect of the episode was when Mac pulled a Houdini move when she deals with a fact-check hitch followed abruptly by a technical failure. She handles it with the ease of a seasoned vet still in her prime and reminds us that there is a reason why Charlie brought her on and that even with all of her awkward tendencies she is absolutely the backbone of News Night.

Using the flashback method perfected in Lost, Sorkin slowly gives us a few tidbits about what’s been going on:

-Don found out that Maggie is in love with Jim and calmly breaks up with her – something the audience has been waiting for so it wasn’t a big surprise.
-Before the breakup Jim didn’t want to be around the couple so he goes on the road with the Romney campaign for a few weeks.
-New guy is brought in to replace Jim (impossible) and chooses a guest for a panel with Sloan and Will who ends up being a disaster.
-Reese is shut out of a legislative meeting at the Capitol Building and Charlie takes Will off the 9/11 Anniversary segment because of this Taliban comments.

So things aren’t going so well in News Night land making the first episode kind of a bummer to watch but it does set up what will be a big, overarching storyline. A lawsuit of this magnitude is no joke but I’m hoping that Sorkin decides to flesh out the characters more rather than getting bogged down in legal issues. Hopefully episode two packs more of a punch than the opener because I want to have eyes glued to the screen when it comes to this show.