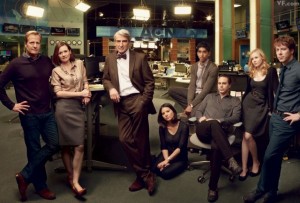 Surprise! The newest show I’m watching is about journalists! Except this one is about television journalists rather than newspaper writers. Created by Aaron “Warp Speed Dialogue” Sorkin, The Newsroom chronicles the behind-the-scenes events at the fictional Atlantis Cable News (ACN) channel. The show, which premiered on HBO two weeks ago features an ensemble cast including Jeff Daniels as anchor Will McAvoy, who, together with his staff, make a goal of producing a news show “in the face of corporate and commercial obstacles and their own personal entanglements.”

While the cable channel is fictional, the events it covers are not which makes the fast-paced show even more interesting and intelligent. McAvoy, a local celebrity who is as arrogant and as he is smart, has no choice but to allow his ex-girlfriend, MacKenzie McHale (Emily Mortimer), come in and fix what has become a bland News Night show. Her “Version 2.0” bring the balls back to the news and wakes McAvoy up – in the both the best and worst ways possible.

The rest of the team at ACN is very smart and all have their strengths but my favorite two characters are Jim Harper (John Gallagher, Jr.) a producer who was offered another job when MacKenzie’s previous show was canceled but turned it down to follow her to News Night and Neal Sampat (Dev Patel from Slumdog Millionaire) who is McAvoy’s blog writer and Internet news scanner. This kid is so on top of things he covered the London underground bombings with a camera phone. Jim and Neal are sharp, funny and can handle the seemingly endless pressure and chatter of the newsroom.

Why do I love this show? It’s well-written and well-acted, teaches current and historical events, accurately depicts how much work goes into media jobs and how they affect the public and includes a writing aspect I can relate to in many ways. Will people who aren’t in the journalism/media world appreciate the show? Absolutely. If for no other reason they should tune in to see Jeff Daniels playing a role that doesn’t include dialogue like:

Harry: I expected the Rocky Mountains to be a little rockier than this.
Lloyd: I was thinking the same thing. That John Denver’s full of shit, man.

As much as I laughed during Dumb & Dumber, I must admit that watching Daniels act like a badass adult rather than a man-child is way more fun.

Tune in to HBO or watch the show On Demand. Although The Newsroom premiered to strong ratings it also garnered mixed reviews. But have no fear – HBO has already renewed it for a second season after only three episodes. Boom! Can’t ask for better press than that!