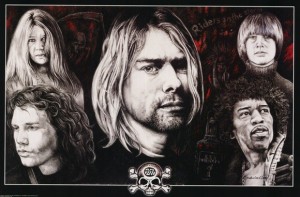 On June 21 I wrote about how after an embarrassing performance in Serbia, which was covered by a variety of media outlets, Winehouse cancelled the remaining dates of her European tour.  I wrote about how she was becoming more like the Scott Weilands and Courtney Loves of the world, as she was better known for her nutjob antics, endless rehab stints and strange attire rather than for her voice.  I said that she needed to get her act together because she had too much talent to be screwing it up with drugs.  Although as of now it is unknown how she died there is a very good chance that drugs were involved.

So now Winehouse is  a member of the worst club in music – a club of outstanding musicians that died at 27-years-old and way too soon:

Brian Jones – Rolling Stones founder and guitarist who drowned in a swimming pool.

Jimi Hendrix – One of the best guitarists of all time died because he choked on his own vomit after combining sleeping pills with wine.

Janis Joplin – Lead vocalist and songwriter for Big Brother and the Holding Company and one of the most interesting female voices of all time lost her life to a heroin overdose.

Jim Morrison – Lead singer and songwriter for the Doors whose cause of death is listed as heart failure, even though no autopsy was performed.

I’m in no position to tell anyone how to live but I am not interested in the music business losing any more talent.  Musicians: if you can’t handle your booze and/or drugs put them down and walk away.