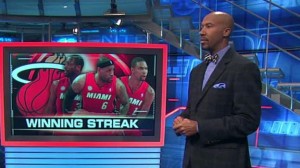 In honor of the Miami Heat’s 23-game winning streak I thought I’d delve into some of the other impressive winning streaks in sports history. The streak the Heat needs to beat is the 1971-1972 Los Angeles Lakers team who won 33 straight, which is 11 more than the Houston Rockets who are at number two on the list.

Here are a few of the best in other sports:

Football: Although he is now a Bronco, during his 2008-2009 year as an Indianapolis Colt, Peyton Manning led his team to 23 straight regular season victories.

Boxing: Between 1952 and 1956, boxer Rocky Marciano was the World Heavyweight Champion and never lost a fight. Marciano won 49 straight over those four years—44 knockouts and five by decision.

Surfing: Kelly Slater has been the biggest name in surfing for almost 20 years and has been crowned world champion 10 times over two decades. Slater’s 10 championships are a record on their own, but his five consecutive championships from 1994 to 1998 make him even more remarkable.

Tennis: Among Federer’s countless achievements is his record for the longest streak of consecutive Grand Slam semifinal appearances – 23. The previous record was 10.

Hockey: NHL legend Wayne Gretzky’s 13 consecutive seasons of scoring 100+ points has not been surpassed and he retired in 1999. Bobby Orr, Mario Lemieux and Steve Yzerman are among the players sitting way behind Gretzky’s record.

Car Racing: Richard Petty is the most decorated NASCAR driver of all time and he racked up a pretty good portion of his 200 wins in 1967. Petty won 27 races that year and 10 of them consecutively.

For all those Heat-haters out there get over yourselves. I’ve been a Heat fan since I was old enough to hold a basketball and watching this team is nothing if not exciting. Also, this blog is not going to be a jinx like being on the cover of Sports Illustrated. That is all. Go Heat!