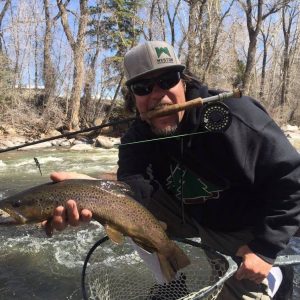 In Colorado we are used to thinking of the year in terms of seasons, and those seasons are usually based on the activities we participate in and enjoy the most. Rather than thinking of the seasons as simply winter, spring, summer, and fall, Eagle County locals get excited about snowboarding, skiing, snowshoeing, and snowmobiling, followed by hiking, tubing, paddle boarding, and kayaking.

But guess which Colorado outdoor activity doesn’t have a season? Fly fishing! One might ask: How is it possible to fly fish when it’s snowing? Well the short answer is that Colorado fly fisherman are hardcore – and I should know. My boyfriend Brian is an avid fisherman and, as a 23-year Eagle County local, he literally fly fishes almost any day of the year.

After so many years of watching him and his buddies fish, I’ve learned a few things:

While fly fishing is definitely a sport that requires skill and persistence, it also involves a lot of expensive equipment. Brian has seemingly countless rods, reels, and line, and that’s just for freshwater. He has even more for saltwater fishing! And the time spent fishing can be anywhere from an hour to several days – we’ve all heard of “island time” but there’s definitely “fly fishing time” as well. And by that I mean time just goes by when they are out there catching fish and the next thing you know they are home at dark.

So if you’re dating a guy who loves to fly fish get ready for the following:

As a fly fisherman’s girlfriend, I always keep in mind that while fly fishing is an active sport, it’s also relaxing and fun. If you’re more of an observer (like me) join your significant other by the water. It’s enjoyable to watch and you just might learn something – 365 days a year.