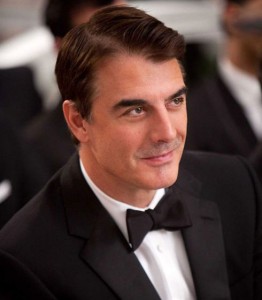 If you’ve ever seen Law & Order, Sex and the City (the show and movies) or The Good Wife you know who the actor Chris Noth by face but you may not recognize his name. He is the good looking guy who is charismatic, smart, always in a suit and usually causing some kind of trouble.

Noth has two Golden Globe nominations under his belt – one for his role as Mr. Big in Sex and the City and the other for his role as Peter Florrick in The Good Wife and has been in the business since 1981 so my question is this: Why isn’t he a bigger star? Why isn’t he as well-known as television actors like Matt LeBlanc, Tim Allen or Ray Romano?

In addition to television, Noth can be seen on Broadway. He recently starred in the Broadway revival of the play That Championship Season and starting in 2013 he began appearing in a theater festival in Napa Valley called Plaza Del Sol. Noth is also co-owner of The Cutting Room, a music venue in New York City, is married to Tara Lynn Wilson and has a son.

So what’s the deal? Is it because he hasn’t starred in any big movies? In my opinion he possess George Clooney-caliber looks and is a phenomenal actor so I’m assuming Noth chose to stick to TV. Maybe he was afraid that he wouldn’t successfully make the transition from the small screen to the big screen – especially since some actors (i.e. Andy Samberg, Zach Braff and Matthew Perry) have had so much trouble in that department. That being said Jennifer Aniston, James Gandolfini and Helen Hunt did just fine. So maybe Noth didn’t want to take that chance. And unfortunately at this point he may be too old to be a leading man. Although he is clearly aging well, Noth will be 60 in November.

Since he continues to do well as a TV actor I guess there’s no reason for him to become a movie star. Instead, he turns in Golden Globe-worthy performances playing lawyers and businessmen with grace and ease and even if the audience doesn’t remember his name they certainly remember his face and the characters he plays. I mean what would TV history be without Mr. Big and Peter Florrick? Way less juicy for sure.