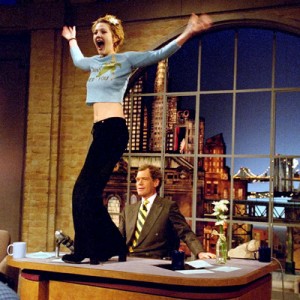 On February 17, Jimmy Fallon took over for Jay Leno and the world was finally relieved of listening to the latter’s annoying face and voice. Then yesterday, not even four weeks after the passing of The Tonight Show torch, David Letterman announces that after 31 years he’s retiring from Late Night. But don’t get too nostalgic yet; he’s not going anywhere until his current contract ends which is in August 2015.

Whether you’re a fan of Letterman or not, this is a pretty big deal because three decades is a long time and he has arguably interviewed every celebrity, politician and recognizable personality in America. In 1996, he was ranked number 45 on TV Guide’s “50 Greatest TV Stars of All Time” and, in 2013, Letterman surpassed mentor Johnny Carson as the longest-serving, late-night talk show host in TV history.

A few examples of Letterman’s memorable moments (in no particular order):

-While interviewing Jerry Seinfeld as a guest on his show, Letterman brings in Michael Richards via satellite so he can give a heartfelt apology about the racist tirade he unleashed during a recent stand-up night. Although some people in the audience were inappropriately laughing, Richards held it together and Letterman did a good job handling the interview in a very appropriate manner. Not sure why Richard’s chose Letterman’s show as the platform for this apology but I believed him. (2006)

-Back in 1993, Letterman decides to jump on a McDonald’s drive-thru radio in New Jersey. He makes trouble, is a pain in the ass and pretty much heckles every customer. It’s hilarious. And Letterman looks like a 12-teen.

-Drew Barrymore helps Letterman celebrate his birthday by jumping on his desk and flashing the audience and the host. #nobigdeal (1995)

-You never know what you’re going to get with Joaquin Phoenix and in 2009 he showed up to the Late Show with a full beard, dark glasses and crazy hair. He gave an indiscernible interview during and then proceeded to drink the host’s coffee and stick his used gum on the desk.  We still don’t know if he was serious, on drugs or just way more clever than the rest of us.

So now that Letterman has announced his exit it will be interesting to see who takes his place. There has been talk about a female joining the late night bro-fest – i.e. Tina Fey or Ellen DeGeneres. Also being discussed are Stephen Colbert and Craig Ferguson.  In my opinion any of those options would be great. Although they would have big shoes to fill, I’m sure all of them could pull it off.

Cheers to you Dave – you’ve done a great job the last 31 years. Johnny Carson would be proud.