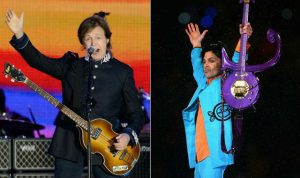 Over a month has gone by since Prince’s death and one of the biggest topics surrounding his passing has been what he went through to ensure that he owned the rights to his music.

During his 1990s battle with the music industry, he protested the major-label system by writing the word “slave” on his cheek and changing his name to an unpronounceable symbol. Once the world moved to online music, he monitored his music rights so closely that most of his songs could not be found on streaming services like Spotify and Pandora.

Clearly an advocate for artists being in charge of their own destiny, Prince rebelled against Warner Bros. during this time and started started his own label, NPG Records. In 1996 he released a triple album, Emancipation, through a deal with EMI that allowed him to put out albums on his own time schedule. Over the last few years Prince took complete control of his music rights which included ownership of his music publishing (the copyrights for songwriting) and his recordings which (surprisingly) brought him back to Warner Bros. in 2014. As a result, he pulled all his music from most streaming services with the exception of the Jay-Z owned Tidal.

Side note: Ever wondered what the difference between master recordings and music publishing is? I did so I looked it up:

Music publishing – the money an artist earns from government mandated royalties that must be paid when other people or companies use music written by the artist.  Examples include: 1) the artist’s record company making a copy of the music (mechanical royalties). 2) When a radio station, website, or restaurant plays an artist’s music to help them make money (public performance royalties). 3) When a television show or film uses an artist’s music in their productions (sync royalties).

While some artists like Prince have been aware of the importance of music rights for most of their careers, others were not as smart or couldn’t afford the price tag. In 1985 Michael Jackson purchased most of the Lennon-McCartney songbook when he bought the entire Sony/ATV music publishing catalog for $47.5 million. Although McCartney and Lennon tried to purchase Northern Songs (their original publisher) in 1969, they lost out to Sony/ATV and then Jackson snapped up what went up for sale. As a result, McCartney has not been in control of his songs for over five decades.

But in 2018 that might change. Why? Because the U.S. Copyright Act of 1976 gave songwriters the ability to recapture the publishers’ share of their songs, and when titles were written before 1978, writers can take back songs after 56 years. Additionally, that legislation allows for writers of songs issued in or after 1978 to recapture their publishing after 35 years. And guess what happens in 2018? The Lennon-McCartney catalog begins hitting the 56-year mark. But regaining publishing ownership is no easy task as a songwriter must file with the U.S. Copyright Office, terminating the publishing anywhere from two to 10 years before the 56 years pass, in order to obtain ownership of that song’s publishing. Additionally, if the writer fails to put in a notice within that window, they have another five-year period to reclaim the copyrights but each day’s delay adds another day that the publisher owns the copyright. Wow that’s a lot of hoops!

According to Billboard magazine, in December 2015, McCartney filed a termination notice of 32 songs with the U.S. Copyright Office. While many of the titles are widely acknowledged to be solo Lennon compositions (the duo shared songwriter credit for the duration of the Beatles’ existence) the U.S. Copyright Act applies just to McCartney’s share. Billboard also reported that only McCartney’s half of the pair’s songs are eligible for termination and only for the U.S. since Sony/ATV still owns the other Beatles songs in the rest of the world.

As for Lennon, who died in 1980, the publisher’s portion of his piece of the Lennon-McCartney catalog for songs written in 1962 became eligible for reversion in 1990 because his death occurred during the first 28-year copyright term. However, Sony/ATV allegedly cut a deal with Yoko Ono in 2009 which enabled the retention of the publisher’s share for the life of the copyright, which lasts for 70 years after the artist’s death. However, when co-writers are involved, the countdown begins after the last artist dies. Since McCartney is still alive, the clock hasn’t started yet.

You know who else doesn’t own their publishing? The Rolling Stones. Instead, ABKCO Records – which also administers Sam Cooke’s catalog – owns all the Stones’ primary hits including “Satisfaction,” “Honky Tonk Women,” “Brown Sugar,” and “Wild Horses.” In fact, the company owns all the band’s songs from 1963 to 1971 which means that ABKCO controls 100 percent of the worldwide copyright to that original publishing catalog of Jagger/Richards Rolling Stones compositions. ABKO is also the sole source of rights and licensing for these songs along with the corresponding master recordings.

Long story short: Never sell your publishing or master recordings. Guard them with your life because if you let them go you may not live to see the time that you can get them back.