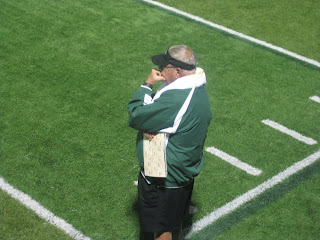 Every good sports movie features a coach that made an impact on the lives of his or her players. In inspirational films like Coach Carter, Miracle and Hooisers and even in intense sports movies like Any Given Sunday, coaches are the key to making their players better people and their teams more competitive. While I did have some excellent teachers over the years there are some names I have forgotten. Conversely, the names of my coaches have and will always stay with me.

This past weekend in Miami my high school basketball coach, Dave Hewett, retired after 39 years. Although there is no question that coaching football and basketball is his passion, at the age of 62 he should be doing the other things he loves that are less stressful like listening to Jimmy Buffet records and fishing. Although his heart told him not to retire his head and the rest of his body knew it was time to move on. And so, the longest active coach in Miami Dade high school sports coached his final football game under the lights at Ransom Everglades on Friday, November 5.

As I’m sure Carly and Shaina remember, Coach Hewett wasn’t the easiest guy to play for but there was so much about him that we loved. His one-liners, the way he stood with his arms crossed, his pick and roll plays, etc. His dry sense of humor is one-of-a-kind and there is no question that Coach Hewett is an original. There is not and will never be anyone like him.

A few of my favorite Hewett sayings:

“If the queen had balls she’d be king.”

“I want you guarding that player like flies on stink.”

At Hewett’s final football game on Friday several generations of players congregated to watch and pay their respects. Players from prestigious high schools such as Palmer, Belen and of course Ransom, whose ages ranged from 16 to at least 40, were there to talk about their favorite and most idiosyncratic coach. It was amazing to see all those people come together for him and to share all of their fond and funny memories of one of the best personalities in high school sports.

While Coach Hewett was mainly a football coach I will never forget playing basketball for him for three years at Ransom. He is so much of a character that Mo had Hewett bobble heads made while I was senior in high school. Yep you read that right – bobble heads. And they were complete with the towel he always wore around his neck and his visor on his head.

There is no question that Coach Hewett retiring is the end of an era, but I think that he will enjoy seeing his successor (who I’m sure will be either someone who played for him or he coached with) apply what they learned from the unparalleled Coach Hewett on the field. One of my best friends (who runs the show at Ransom) coached with him this year and I’m hoping he’ll want to take the reins. There would be no one better to replace the best.