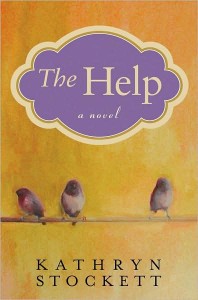 Two years ago my mother gave me a copy of “The Help” and said I needed to read it and I never did.  I’m not sure why – it was a New York Times and Los Angeles Times best-seller and was getting all kinds of great press.  But I still didn’t read it.

On February 11, 2011, Bernise “Ber” Jenkins, the woman who raised my mother, my aunt, my two uncles, me and my three cousins, passed away.  She was 80 years old.  We were all so devastated and four months later I would have to say that we still are.  Today, June 17, is Ber’s birthday and the first time in my entire life that I can’t call her to wish her a happy birthday.  It’s a terrible feeling.  So in an effort to try to not be sad I decided that in honor of her birthday I would finally start reading “The Help.”

I remember when my mother gave me the book she said it would remind me a lot of Ber and when I cracked open my copy last night there was a note from her dated December 2009 that said: “Please read this – it will give you a glimpse of what it was like growing up with Ber in the 1960s.”  And even though I’m only 30 pages into the book it was clear from the first paragraph that my mother was right.  One of the main characters/narrators, Aibileen Clark, sounds like Ber.  On the first page of the book she talks about how she’s raised 17 white children – Ber in a nutshell except she only had to deal with eight of us over the course of 60 years.

For those (like me) who haven’t read “The Help,” here is a quick synopsis:  Written by Kathryn Stockett, “The Help” is about African American maids working in white households in Jackson, Mississippi during the early 1960s.  The novel is told from the point of view of three narrators: 1) Aibileen Clark, a middle-aged black woman who has spent her life raising white children and who has recently lost her only son. 2) Minny Jackson, an black woman who is known for her cooking and her back-talking big mouth.  3) Eugenia “Skeeter” Phelan, a young white woman and recent college graduate who, after moving back home, discovers that the black woman who helped raise her since childhood has abruptly disappeared.  According to what I’ve read, the stories of these three women intertwine to explain how life in Jackson, Mississippi revolves around “the help” and how the relationships tie together the white and black families of Jackson.

(By the way – this book has been so important to so many people that they’ve made a movie out of it.  The movie is slated to hit theatres on August 12).

In the first few chapters I’ve read, it is clear that my mother’s experience with Ber was very different than my experience with Ber.  For example, while Mom had to deal with “colored” people having separate bathrooms and water fountains in the 60s, Ber was driving Marshall and I all over the city of Miami to our various activities in the 80s.  That being said, the way Ber raised us was the same – with love, compassion, kindness and no-nonsense.

Back in February all eight of the children (ranging from about age 60 to 13) Ber raised came together at her funeral in Savannah, Georgia.   We got to meet the people of Ber’s past – including family, friends and even an ex-husband were unaware of!  It was like Ber had two families– the Savannah family and the Miami family- and it was clear that she was extremely important to both so it was great to see where she was from.  My uncle was the last person to speak at her service and he introduced all of us to the Savannah family.  He described who we are, where we went to school and what we do for a living.  At the end he had us all stand up and then said something I’ll never forget: “Here they are:  the Bernise Jenkins collection.”  In addition to being very clever my uncle was absolutely right – Ber raised all of us and helped shape us into who we are today.  I have a feeling that Aibileen is going to be the same way in “The Help” and I’m looking forward to reading more this weekend.

Thank you to my mother and to Natalie for reminding me to read this book – its already bringing back memories.

Happy Birthday Ber.   We miss you.