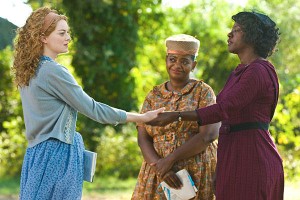 Last night I finally gathered up the guts to see The Help – the movie.   And by that I mean I knew I was going to cry my eyes out like a little girl but at the same time was very much looking forward to seeing the story that resonated with me in so many ways on the big screen.   The film was fantastic and here is why:

-It stayed mostly true to the book.

-The first song on the soundtrack was Johnny Cash and June Carter’s famous song, “I’m Going To Jackson.”

-The actresses playing the lead roles (Viola Davis, Octavia Spencer, Emma Stone, Bryce Dallas Howard, etc.) were a force to be reckoned with as they played their parts with guts, strength, courage and compassion – attributes these women all possessed to get their stories heard.

-The two main characters – Aibileen and Minnie – reminded me so much of Julia and Ber.  The caring nature of these characters combined with their want and need to take care of other people’s children was something I felt in my bones.

-Skeeter, the young writer who is the main female white character, was an inspiration.  She was the only non-racist person in the story and had the valor and vision to see beyond color no matter how much people warned her otherwise.  The bravery in her eyes and her refusal to conform to the beliefs of the rest of the people in her life was amazing.

-The fact that there was a time in this country when black people were basically told they were diseased humans who didn’t deserve to breathe the same air as white people angers me so much that I want to throw something.  But knowing that even in the 60s there were people like Skeeter makes me take a breath.

-Having been raised by two incredible black women, watching the way the maids of Jackson, Mississippi cared for young white children was like going back to my childhood.  I miss Ber.

-When the group of maids were telling stories about the white families they worked for I was glad that they weren’t all horror stories.  Hearing one of the maids talk about how her boss bought two acres of farmland just so she could get to work easier reminded me of my mother and aunt. They did so much for Ber and my mother would do anything for Julia.

-I loved the relationship between Minnie and white socialite wannabe Celia – their symbiotic need for each other was fun to watch.  They were great friends whether Minnie wanted to admit it or not.

-Although Aibileen had already suffered so much heartache, the worst of which was losing her 24-year-old son, she still maintained hope, dignity and a sense of humor.  Even with all the pain she endured, when JFK died Aibileen still put his photo on her wall right next to the photo of her son.

This movie reminded me how often courage/bravery is underrated but if anyone knew how to brave it was the maids of Mississippi who put away their fear in order to achieve something extremely significant.  Clearly Aibileen embodied the qualities she wanted to be sure her white children knew – that they were kind, smart and important.  And so is Julia and so was Ber.