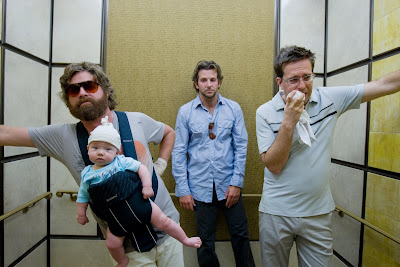 Remember that random comedy that hit theaters in summer 2009 about a bunch of friends who go to Vegas for a bachelor party starring nobody anyone knew other than Bradley “I was the asshole in Wedding Crashers” Cooper and the guy who some people vaguely remember from the Nic Cage mystery/adventure movie National Treasure? Well, it turned out to be kind of a big deal. And it wasn’t because it had cameos from Heather Graham and Mike Tyson.

Unless you have been living under a rock for the past year, you know that the The Hangover was not only hysterical but that it also made stars out of the people who were in it. Everyone now knows who Ed Helms and Zach Galifianakis are and everyone loves them. Additionally, the movie had an international box office gross of $467.4 million, won the Golden Globe Award for Best Motion Picture – Musical or Comedy and received multiple other awards and nominations. That’s pretty good for a flick about a bunch of dudes who are so hungover that they have a tiger and a baby in their suite and can’t remember why.

In the last few weeks I have noticed that The Hangover has influenced pop culture in more ways than anyone could have predicted. Besides the fact that it’s extremely quotable…

“You guys ready to let the dogs out?”

“Maybe we should tell that to Rain Man, because he practically bankrupted a casino, and he was a reh-tard.”

“Would you please put some pants on? I feel weird having to ask you twice.”

…The Hangover has influenced a lot of TV show episodes such as Rescue Me’s “Blackout” and Royal Pains’ “The Hankover.” In Rescue Me, New York firefighter Tommy Gavin gets lit up one night and wakes up to an apartment that looks like a hurricane hit it. When he arrives at the fire station that morning he finds out that his oldest daughter is missing and that he apparently hit his wife. Although those scenarios are not the least bit funny, the rest of the episode is. Tommy’s fellow firefighters help him solve the mystery of what he did the night before by putting together clues and talking to people who he interacted with which include, but are not limited to, the several women he fooled around with and the various bartenders he came in contact with.

In Royal Pains the episode begins with the major characters waking up in a variety of places like a hammock and a cab (the driver being Bill Bellamy), among other places. Some wake up with tattoos while others find themselves in crazy outfits, but everyone has questions about what happened the night before. We then go back 24 hours during which we learn what the hell happened. After watching surveillance footage and piecing a few clues together everyone figures out the events of the previous night.

So how does a movie like The Hangover spawn episodes of television shows that are so far removed from the movie? I guess when a movie is so good that it becomes iconic you have to chalk it up to imitation being the sincerest form of flattery.