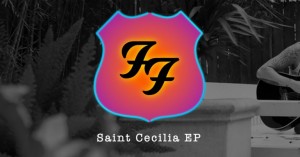 While it’s no secret that I’m a Foo Fighters fan, people who love music have to give credit where credit is due when it comes to Dave Grohl. After counting down on their website until last night, the band revealed the release of their new EP Saint Cecilia. Not only did fans get an early Christmas/Hanukkah gift in the form of five new songs, the band also gave them away for free. Recorded at the Austin, Texas hotel of the same name, Saint Cecilia is full of the rock and roll/metal/punk greatness that attracted me to this band in the first place.

My favorite song is “Savior Breath” – I can’t help but get excited when I hear that kind of distortion and loud guitars paired with Grohl’s vocals. It’s fantastic. For those who like slowed down Foo, check out “Iron Rooster.” Regardless of preference, all five songs are awesome and welcomed additions to the band’s already monumental catalog.

In addition to the EP, Grohl exemplified his incredible writing skills with a long letter to fans that discusses three recent milestones for the band: The making of Sonic Highways (their 2014 HBO documentary and album that centers around their travels to eight American cities and the historical significance and musical inspiration from each one), his gruesome leg injury that probably should have but didn’t keep him off tour, and the Paris terror attacks. Although Grohl says that Saint Cecilia was meant to be an end-of-the-tour thank you to fans, the final leg of the Sonic Highways tour was abbreviated as a result of the November 13 attack in Paris.

Congratulations to the Foo Fighters for a) recording five more incredible songs, b) being kind enough to give them to fans for free even though we would have paid for each and every one of them and c) for continuing to remind everyone why music is so important.