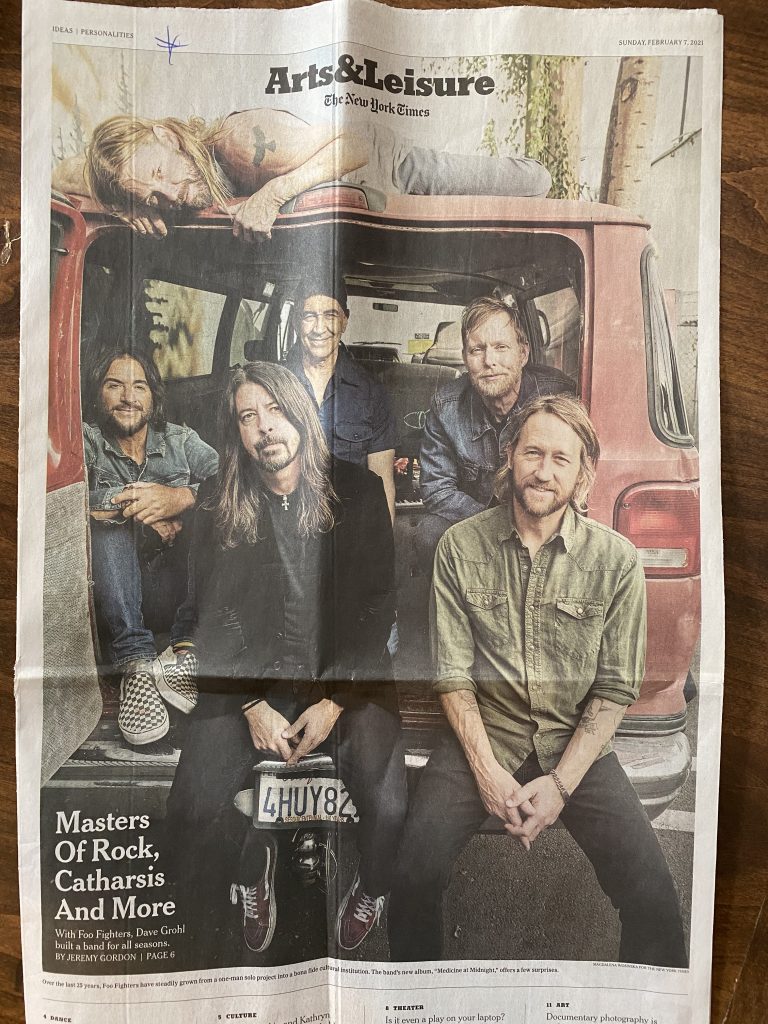 While it is no secret that I’m a huge Dave Grohl fan, there is also no denying that something huge is happening with him and his band right now. Actually a few huge things:

That’s a lot going on for a band that started as a one-man, post-Nirvana side project by a grieving, broken-hearted Grohl. And there is no one who deserves success more than a guy who clearly just wants to play music in an awesome rock and roll band. Wow did he make that happen. He’s also a son (he talks about his retired school teacher mother all the time), husband, and father of two.

In his recent Times article, writer Jeremy Gordon points out so many things I’ve always thought about Grohl and the Foo Fighters and provided some new observations:

“The Foos have become comfortably associated with a style of adrenalized, heavy-footed hard rock, doled out in concerts that commonly stretch past the two-hour mark.” Have you seen the FF live? They tear the roof off of every venue they play.

Although their last worldwide tour grossed $114 million, the band hasn’t charted a Top 40 single since 2007. How is that possible?

“No matter where Foo Fighters show up, they always make sense. This is partly a result of consistency and…writing songs with staying power…[making the band] recognizable to multiple generations.” I’ve been saying for years that the FF have something for everyone. Also, Grohl seems like the coolest guy to hang out with.

Because the FF “have averaged a new album every three years since the beginning, and rarely go dormant for more than a few months at a time,” they are always relevant.

While the Foo Fighters have become their own global entity, it helps that Grohl’s roots in music run deep. He got his start playing drums for hardcore punk band Scream, and then auditioned for arguably the biggest grunge band of all time. After Nevermind was released, the music world changed. Gordon describes it as “an industry-topping smash that tilted the axis of mainstream taste toward angsty rock.” No truer words. Everyone has a story about that album and that band and Grohl was part of the three-piece that made history.

Following Kurt Cobain’s death, Grohl was offered many drumming gigs, including a full-time role with Tom Petty, which I had no idea about. Thankfully, he declined those offers, recorded an album (that features two songs I play on the radio all the time, “This Is A Call” and “I’ll Stick Around”) and decided to name his solo project after a WWII phrase for UFOs. Of course.

I am proud to say that I’ve been a fan since the beginning – which is not something I’m able to say about a lot of my favorite bands because they started before I was born or when I was too young. I have always felt that the FF are my band. They are everyone’s band. And that’s why I hope they get inducted into the Rock and Roll Hall of Fame, continue to earn every accolade, and, most importantly, continue to make some of the best music of my generation.