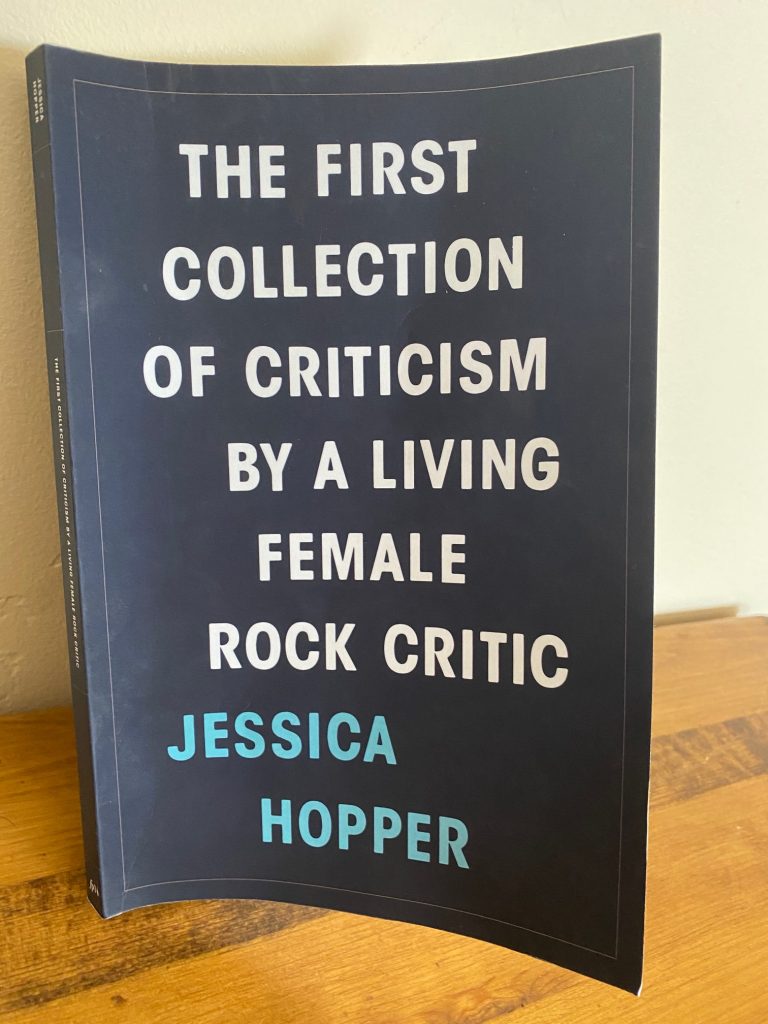 While author Jessica Hopper is definitely a sharp writer, she is more than a rock critic. Her subjects encompass a variety of genres including Chance the Rapper, Lana Del Rey, Pearl Jam, Coachella, grunge, Lady Gaga, Michael Jackson’s hometown, Nirvana’s 20th Anniversary boxset, Miley Cyrus, Bruce Springsteen, St. Vincent, and The Raincoats, among many others. I can relate to her in many ways – and not only because we appreciate a wide array of music. Before I read that at the time of the book’s publication (2015), she was the Senior Editor of Pitchfork, I knew she had been in publishing for a while. She describes Van Morrison’s “Beside You” as “a fierce, rambling pledge” in which he uses “a torrential cadence of nearly unintelligible half-sentences that sound like they could be directions someplace.” She then talks about how a different version of the song appears on the album T.B. Sheets which is significantly tamer than the “drinkin’-straight-from-the-bottle, succulent, lo-fi, four-bar, party-blues hip sway of the original.” Her writing is refreshing, thoughtful, and clearly indicates that she’s both a critic and music fan. A die-hard fan. In fact, she says “there is a void in [her] guts which can only be filled by songs” and I believe her.

Throughout her collection of articles, she talks about a variety of topics including the long-debated question of whether it’s acceptable to ignore what certain songs are saying just because the music is good. She also points out that Lady Gaga (in 2011) “teases out the fantasy of the pop star by never dropping the act – she’s like a superhero, never appearing out of uniform.” While she has done a lot of transforming since 2011 that has made me a fan of hers, I remember when Gaga was all about the glam and how she was always making a scene. Hopper describes one of her outfits as being mostly accessories rather than garments of clothing and I laughed out loud. On another note, her description of Bruce Springsteen’s music is spot on: “grand, lovelorn tunes of cars and girls and memories that were easy to relate to.” She explains that even though Born to Run is the more famous album, The Promise: The Darkness on the Edge of Town Story is the “complete package” because Springsteen exemplifies “the craftsman capable of putting all your too-familiar restlessness into a song you’d want to hear a thousand times.” Amen.

In 2005, Hopper attended Coachella for the first time and absolutely lights it up for the sham that it is and I love it. While I’ve been to a festival or two – Warped Tour (which Hopper also writes about) in high school and the short-lived Mile High Music Festival in Denver over a dozen years ago – I think festivals are the biggest scam in live music. They are billed as events where attendees can see “so much music” in one place under the ruse that they save money by seeing a long list of artists at one venue. It’s complete bullshit because inevitably there are too many people, too much beer, it’s too hot, everything is too expensive, and unless you really commit and camp out at one stage the entire time and never use the disgusting port-a-johns, you never actually get a good seat at any of the shows. No thanks. So when Hopper describes the mile-and-a-half-long walk from the parking lot to the venue I knew we were on the same page: “I had a hard time crediting Coachella with being America’s only European-style festival, as it’s often described; instead, the nobody-asked-for-it eclecticism of the many small attractions called up the ghost of Lollapaloozas past.” She also notes that as soon as Coldplay frontman Chris Martin started talking about how their new album might be the best of all time, she took it as her cue to leave. I would have left with her.

One aspect of Hopper’s collection that I’m unclear on is whether or not she is a grunge fan. She makes a ton of references to the genre and the people who make/made it great but it’s hard to decipher if she actually likes the music. For example, she spends two-and-a-half pages on Pearl Jam’s 20th Anniversary concert and devotes most of those pages to talking about how well Eddie Vedder and Chris Cornell aged (may the latter rest in peace). But then she devotes fifteen pages to the making of Hole’s Live Through This. Later in the book, three pages are spent discussing the ridiculousness of the 20th Anniversary boxset of Nirvana’s Nevermind. I love Nevermind but she makes some solid points. She describes Kurt Cobain as “the anointed grunge Buddha” who is “as big now as he’s ever been, which is to say nearly ubiquitous.” And that was in 2011. While she acknowledges that “Nirvana’s supersize ghost lingers in our hearts,” she thinks the multiple mixes, versions, outtakes, and packages of the album is more about squeezing money than celebrating the music. I agree but I’m still a Nirvana fan and will always be a grunge fan. I’m still not sure where Hopper stands.

All of that being said, she clearly understands the music business. In a 2013 article, she writes about how bands/artists who allowed their music to be in commercials used to be considered sellouts but doing so is now a “crucial cornerstone of success” because magazine covers and radio play no longer cut it. Hopper also includes some interesting facts: Eight out of ten of the most-followed humans on Twitter are musicians and nine out of the ten most-viewed items on YouTube are music videos. Two clear examples of music’s influence on social media and vice versa.

While her feminist perspective is woven throughout the book, it doesn’t hinder the fact that she is a witty, intelligent writer who wants her readers to consider all types of music and why people do or do not listen to certain bands, artists, songs, and albums. The cover of the book says it all because the whole thing is words and that is all she needs. I appreciate her thought process and that she loves music – even when she doesn’t completely understand it.