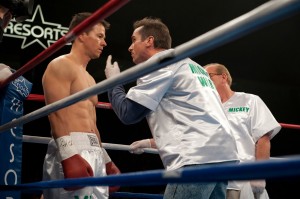 Go see this movie immediately.  While it’s no secret that I love sports movies – especially those that are based on a true story – this movie is incredible.  I also love Mark Wahlberg – especially when he is playing the strong but silent athlete that must overcome all kinds of barriers to reach his dream (see Invincible).  And that’s exactly what happens here, as Wahlberg plays struggling welterweight fighter Micky Ward who is talented but is held down by the family he can’t help but love.

Although Wahlberg is great and there is no question that he has been training for this role for a very long time, he is not the star of the movie.  The Fighter is actually Christian Bale’s movie – he steals the show.  Bale plays Micky’s brother Dicky (yep, you read that right and no, this is not a Cat in the Hat rhyme), a has been fighter turned crack addict who despite his fall from grace is still regarded as the local hero – “The Pride of Lowell” as they call him.  Dicky’s claim to fame is taking out Sugar Ray Leonard 14 years prior, an event he talks about seemingly every hour on the hour, as does his nutjob mother and seven aqua net-haired sisters.   Bale plays this crack addict/former athlete with a tortured charisma that makes it hard to look away.  He is skinny, has jack-o-lantern teeth and dark circles under his eyes but like the people of the neighborhood it’s hard for the audience to ignore him.  He never stops talking and regardless of the fact that he’s horrifyingly addicted to drugs it’s easy to see why it’s so hard for Micky to walk away from the brother that taught him how to be a fighter in the first place.

While everyone seems to look the other way when it comes to Dicky’s drug addiction, Micky is being mismanaged by his chain-smoking, alcohol- pounding mother and is being trained by Dicky who is too whacked out to realize that HBO is filming him as a cautionary tale about crack addiction and not for his big comeback like he thinks.  It’s only when Micky starts dating Charlene (played with some serious balls by Amy Adams) that he figures out that he needs help outside of his family.  Micky finally gets a real manager and a real trainer and starts winning fights as a result.  He’s on his way until Dicky gets in trouble with the law and causes Micky to suffer severe injuries to his hand.  Dicky goes to prison and Micky continues to succeed.  While in prison Dicky suffers from brutal withdrawal symptoms and only when he sees the HBO documentary of himself as an addict does he realize it’s time to clean up his act.

In an effort to not give too much away I won’t go any further plot wise but I will say that The Fighter is full of extremely layered characters who – regardless of how insane they are – put family first.  Wahlberg is strong, silent and resilient – especially for someone whose family causes more pain than the opponents he fights in the ring.  Bale’s performance is award-winning in every sense of the word.  He is intense, enthralling and in your face and it never stops.  And while the Mafioso mindset of this family is as damaging as it is understandable, the mix of drama and action rivals that of The Sopranos with a Boston accent.  Go see what all the fuss is about – and make sure you sing along to White Snake.