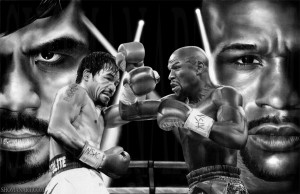 As someone who knows very little about boxing, I found the hype surrounding last night’s Floyd Mayweather/Manny Pacquiao fight extremely fascinating. I’ve never witnessed so much conversation leading up to a battle in a sport that is not typically talked about like football, basketball, or in my world, snowboarding. But all kinds of people with all kinds of interests were excited and wanted to watch the “epic battle” take place.  And it was definitely the social event of the weekend – completely ousting the Kentucky Derby off its pastel, hat-wearing pedestals.

A few of the stats, numbers and fun facts I learned:

-This was a fight five years in the making – that’s how long it took to settle on a deal between the two boxers.

-Everyone hates Mayweather but he’s undefeated so there is something to be said about that.

-Pacquiao is the first and only eight-division world champion with 10 world titles to his name.

-The capacity of the MGM Grand Garden Arena which is where the fight took place: 16,800.

-Tecate beer paid $5.6 million to be the official fight sponsor.

-The estimated total revenue for the bout was between $300 and $400 million.

-Although I’ve seen Ocean’s Eleven, I had no idea that boxing is such a big deal in the celebrity world. The star power in the MGM Grand last night is unparalleled to anything I’ve ever seen. It was like the Grammys, Emmys and Oscars all in one room.

-I wonder what Justin Bieber and Mayweather talk about since they are clearly such good friends.

-Jimmy Kimmel’s Run DMC outfit was definitely the most memorable of the night.

-The two fighters seemed to be amicable and friendly which is more than I can say for the booing crowd at the MGM Grand and the people who I was watching the fight with – wow!

-According to my mother, who happened to be in Vegas while all of this was going on, the entire city was more out of control than usual.

-While the fight was definitely all over social media last night, most people were complaining that it was a letdown and not worth the hype or money.

I found it interesting that even those of us who don’t know much about boxing were talking about the fight. Maybe it caused so much discussion because boxing doesn’t really have a season like other sports. Or maybe it was because so many famous people were there and most of us will never see a professional bout in person. Either way, at the very least, this event was something to write about and I always appreciate that!