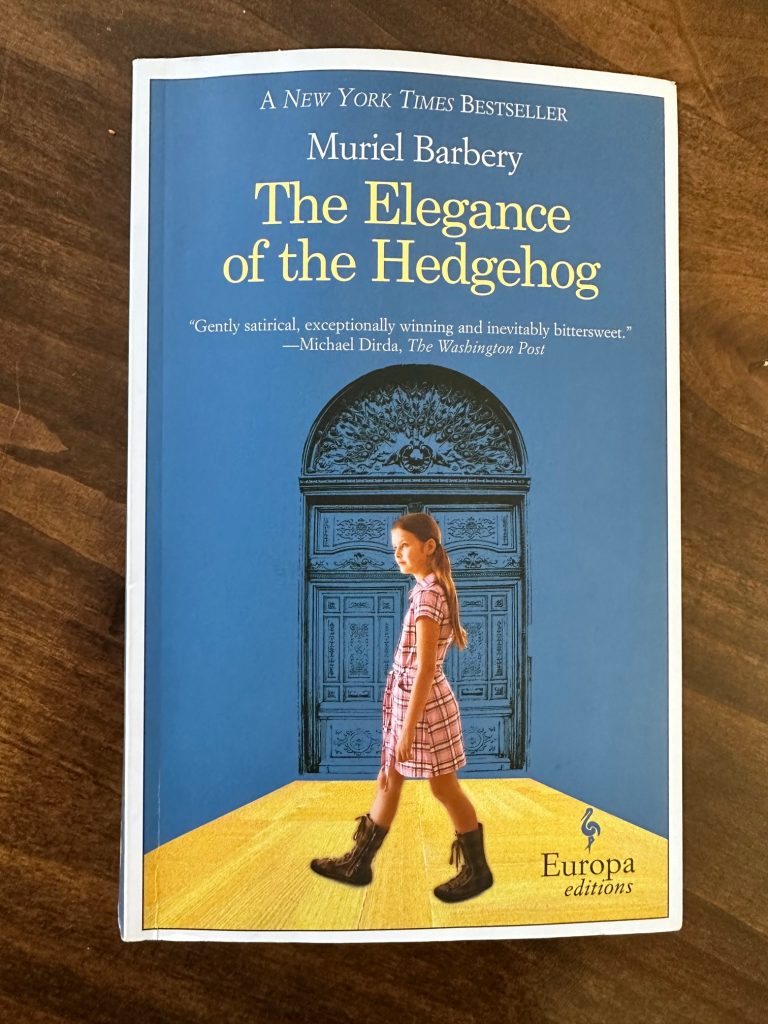 I don’t know what I was expecting from this book, but it definitely surprised me. The characters, their observations, the witty language – all of it. An extremely well-read friend of mine recommended The Elegance of the Hedgehog years ago and I am glad that I was finally was able to read it. She initially thought I’d appreciate the characters’ insights on music and grammar and, of course, she was right. But the book is way more than that.

Both protagonists demonstrate sarcasm that is biting, funny, powerful, and sad at the same time. Although one is 12 years old (Paloma) and the other is in her mid-50s (Renee), they both have a similar intelligent, dry sense of humor and, for different reasons, feel the need to hide who they are which is something the reader learns more about later in the novel. Of course, their attention to language is one of my favorite aspects of the book. Both of them, but especially Renee, use their own satirical diction to watch and comment on the people around them (most of whom deserve it) and I can’t help but laugh. #professionalhazard

The eerie nonchalance of wise-beyond-her-years Paloma is almost scary and Renee’s choice to make everyone think she’s an uneducated concierge is baffling – even later when she explains her reasoning. During the first half of the narrative Renee is angry and lonely – except when it comes to her friend and fellow building employee Manuela – which initially makes her hard to root for because the reader doesn’t know the backstory yet. She later reveals exactly what she has overcome, which helps clarify her behavior, but the idea that her entire life has been (sort of) lived based on someone else’s actions is heartbreaking.

Paloma and Renee have very strong yet very different opinions on education and intelligence and the nuanced observations made by both protagonists says a lot about them. Renee demonstrates how the power of small acts of kindness from a stranger make a huge impact, but then she is hilariously judgmental about a resident’s intelligence: “Her misuse of punctuation constitutes an instance of blasphemy.” I laughed out loud! Paloma is a self-loathing (but smart and clever) rich kid. Even the pets in her building have pretentious names. On a shopping trip with her mom and her annoying friends to a tony store, Paloma observes: “Fine lingerie is already an interesting name. What else would it be – coarse lingerie?” Haha of course.

While the book is heartbreaking but beautifully and intuitively written, the narrative really gathers steam when Paloma and Renee begin interacting which isn’t until page 242. I wish it was earlier. Also, there are a great deal of philosophy references in this book which isn’t for me. Neither is the existentialism discussed by both protagonists. In terms of layout, the short chapters lend to the pace of the book as the vignettes provide detailed snapshots of what’s going on with both protagonists in the past and present. Also, learning about the politics of a posh building in France from the point of view of the concierge and the rich girl who lives there is bittersweet and insightful.

“You can’t leave anything up to chance when you’ve made a decision that most people won’t understand.”

“Music plays a huge role in my life. It is music that helps me endure…well…everything there is to endure.”

“In the end, I wonder if the true movement of the world might not be a voice raised in song.”

“It is crazy how people think that though they understand nature they can live without it.”

“One thing is sure, no matter what: I won’t get any better by punishing the people I can’t heal.”

“When illness enters a home, not only does it take hold of a body; it also weaves a dark web between hearts, a web where hope is trapped.”

“Entrusting one’s life is not the same as opening up one’s soul.”

“I assume a neutral expression – one of my favorites, for its wide latitude of interpretation.”

“You have to admit I have a certain gift for laconicism.”

Paloma and Renee on grammar and language:

“Humans live in a world where it’s words and not deeds that have power, where the ultimate skill is mastery of language.”

“Grammar lessons have always seemed to me a sort of synthesis after the fact, and perhaps, a source of supplemental details concerning terminology.”

“I am a complete slave to vocabulary.”

“To those who have not understood that the enchantment of language comes from nuances, I shall address the following prayer: beware of commas.”

“He’s a specialist in the use of the ellipses in stock polite formulas.”