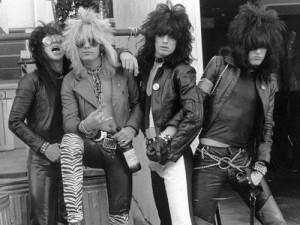 Tough day for Motley Crue fans. Today the band announced their last tour as a band and this time it’s for real. They signed a formal Cessation of Touring Agreement which is effective at the end of 2015 and word is that the decision was a mutual one between all four original band members. This is it rock fans – that contract is binding.

I find this extremely interesting because although I’m so glad I’ve had the opportunity to see bands like Motley Crue, Van Halen, Guns N Roses (ish), etc. I’m sure people get tired of the “last tour ever” psych out. But there is no going back for the band and maybe that’s a good thing.

Kicking off July 2, Crue’s final tour will run through 72 cities throughout the U.S. before going overseas. And guess who’s going on the road with them? Alice Cooper!!! There is no question that Motley Crue knows how to pick tour mates – when I saw them in August 2012 they played with Kiss. Yeah, it was awesome.

As if the final tour announcement wasn’t enough, there is is more. In conjunction with the tour, country record label Big Machine Records has teamed up with Mötley Records to release a Country Music Tribute to Mötley Crüe. I can’t wait to hear this! Confirmed featured artists include LeAnn Rimes, Florida Georgia Line, Brantley Gilbert, Justin Moore, Eli Young Band and Cassadee Pope. I can’t even imagine what it’s going to be like to hear “Kickstart My Heart,” “Girls, Girls, Girls” and “Too Fast For Love” with a twang but I’m excited. Finding out who will sing what will be fun as well.

Although this final tour definitely signifies the end of an era, Mötley Crüe has been in the game since 1981 and is one of the world’s best-selling groups of all time. Having sold more than 75 million albums worldwide and 25 million in the U.S., they are rock & roll legends who have absolutely earned their retirement. Congrats Vince, Tommy, Nikki and Mick – you guys are the biggest badasses in music.