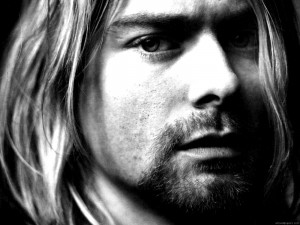 Ready to feel nostalgic, old and a little bummed out? Today marks the 19th anniversary of Kurt Cobain’s death and subsequently the end of Nirvana. Cobain’s tragic death occurred just three years after the release and incredible success of Nevermind – aka grunge’s Thriller.

While Cobain’s death did mark the end of Nirvana, it didn’t technically mark the end of grunge as many extremely popular grunge rock records were released post April 5, 1994 including:

April 12, 1994: Hole – Live Through This (Because of the release date and title, this album stirred up a lot of controversy and questions about whether or not Courtney Love had anything to do with Cobain’s death).

But things were never the same again. Dave Grohl moved from behind the drums into the singer/lead guitarist role, Love became the poster child for addicts who should not procreate, Woodstock ’94 celebrated the iconic festival’s 25th anniversary and flannel came and went.

Cobain’s vigil was attended by thousands, conspiracy theories regarding his suicide swirled and “the spokesman of a generation” was lost forever. While some question whether or not Nirvana would have had such an iconic legacy if Cobain was still alive today, others believe that he, like the other unfortunate members of Club 27 (Janis Joplin, Jimi Hendrix, Jim Morrison, Amy Winehouse), was an incomparable musician who brought something unique, bold, unapologetic and unforgettable to our ears.

Even now as Nirvana’s music has moved to the classic rock station (yep, you read that right) people still get wound up when they hear the first two chords of “Smells Like Teen Spirit” and most have some kind of story associated with the first time they heard or saw the band.

Since their debut, Nirvana has sold over 25 million albums in the U.S. and over 50 million worldwide. Rest in peace Kurt – although you’re no longer with us you did all of us a big favor by writing insightful lyrics, playing killer riffs and not being afraid to damn the man. You are missed and will always be remembered.